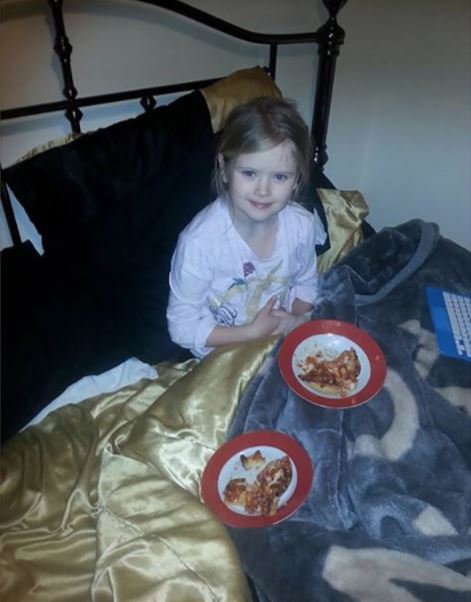 The dad arrested over the murder of his eight-year-old daughter posted a picture of her to his Facebook account just an hour before her death.

Mylee Billingham, eight, was rushed to hospital after police discovered her with stab wounds at an address in Valley View, Brownhills, near Walsall, at 9.15pm on Saturday.

She later died in hospital and a post mortem examination to verify her exact cause of death will take place on Monday, January 22.

Her father, Bill Billingham, who has been named locally, has been arrested in connection with her death.

The 54-year-old, who is set to be quizzed by cops, was taken to hospital with stab wounds to the stomach and is understood to be in a critical condition.

A picture of his daughter eating pizza was posted to his Facebook account at around 8pm on Saturday night – just one hour before police found her with “serious injuries”.

In the photo, Mylee is pictured smiling and eating pizza while tucked up in bed.

The caption to the post read: “Pitza on bed lv moo x.”

More than 50 people have liked the post, including Mylee’s mum, Tracey Taundry.

According to neighbours, she was heard screaming “he’s stabbed my baby” outside the address last night.

Mrs Taundry is not believed to live at the address.

Posting to Facebook, Beth Taundry, a family member of Mylee, said: “Don’t bombard anyone with messages, I know that people will want to pass on their condolences.

“We are far too hurt and far too confused right now to deal with logging onto social media and seeing some of the gossip that people in this area are writing.

“Although on behalf of our family I do want to thank everybody for their concern and the general messages hoping all is okay.

“The least everyone can do is keep us in your thoughts.”

Well-wishers have been leaving floral tributes to Mylee, whose nickname was “Moo”, outside the property.

Graham Greatrex, who lives on Valley View, said he attempted to console distraught Tracy as she came to terms with her daughter’s stabbing.

“We heard the commotion and the mother was standing outside our house.

“I went to talk to her and she said, ‘They stabbed my baby’. She was hysterical. People were racing around everywhere.”

Detective Inspector Jim Colclough, who is leading the investigation, said detectives from the West Midlands Police homicide unit are not looking for anyone else.

He said: “This is an absolutely tragic set of circumstances and my thoughts are with everyone who has been affected.

“We are still at the early stages of understanding exactly what happened and why – but I can confirm we are not looking for anyone else in connection with this investigation.”