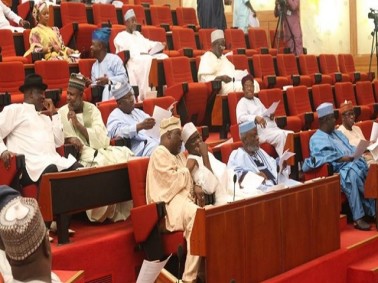 The Senate on Thursday called on the Nigerian National Petroleum Corporation (NNPC) to end the lingering scarcity of Premium Motor Spirit (petrol) and long queues in filling stations across the country within seven days.

This order was followed by a unanimous adoption of the report of the Committee on Petroleum Resources (Downstream) on the fuel crisis in the country at plenary.

The resolution followed the adoption of a report by the Senate and House of Representatives’ Joint Committee on Petroleum Resources following a closed-door meeting between the committee and the NNPC leadership on Wednesday.

In the report presented by its Chairman, Sen. Kabiru Marafa, the committee recommended that NNPC should be given seven days ultimatum to end long queues in fuel stations in the country.

It also recommended that the Department for Petroleum Resources should double efforts to enforce compliance with government’s regulated pump price of petroleum products.

“During our recess, the committee moved around some cities, including Abuja and Lagos, to ascertain the situation on ground.

“When we thought that we were making progress, we just realised that the queues were resurfacing in fuel stations.

“We also engaged with the NNPC and other stakeholders and we were informed that there were challenges of supply coupled with massive smuggling of petroleum products to neighbouring countries for higher prices.

“Also, there is the problem of marketers selling above approved pump price,’’ the report stated.

Reacting to this, President of the Senate, Dr Bukola Saraki, asked the NNPC to ensure compliance with the resolution and endeavour to end the queues within seven days.