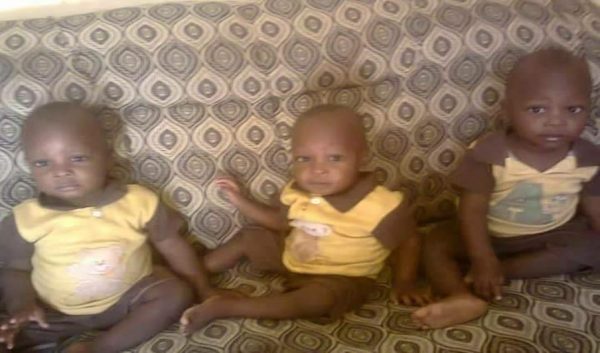 Sadly, a set of Triplets and their young brother lost their lives after their house caught fire due to an electric spark.

The tragic incident happened in Hadejia town, Jigawa. According to reports, the deceased triplets named Hassan Sale, Hussain Sale and Muhusin Sale, all 5 year old and their younger brother, Aliyu Sale, 2, were in the house when the fire started at about 10.45pm over the weekend.

According to the family members of the children, the electric boiler that was plugged, sparked and caused a fire that spread out immediately. The harmattan in the area helped the fire to spread quickly. The remains of the children have since been buried.

See photos of them with their father below;

Share
Facebook
Twitter
WhatsApp
Previous articleSamklef comes for Daddy Freeze on Twitter after Instagram war
Next articleSee What Actor Jim Iyke Did To A Man, Who Told Him To Go And Marry
- Advertisement -Ad ==> Discover how a young Nigerian graduate now makes a consistent 40k per week doing a legitimate online business. You too can start yours now, click here!!!