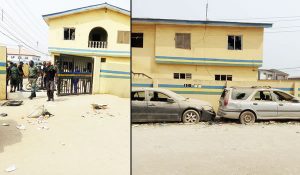 The Ojodu Abiodun Police Station in the Ifo Local Government Area of Ogun State was invaded by some youths on sunday.

The culprits reportedly broke into the cell of the station, freed detained suspects and carted away some valuables, including television sets and seized motorcycles and also destroyed cars that were parked beside the station.

According to reports, It was gathered that a team of policemen had raided a black spot in the Yakoyo area on Saturday, when they were confronted by some hoodlums.

The team was said to have responded with gunshots during which the victim, Dada Omotoye, who was relaxing in front of his house, was hit by a bullet.

He was said to have been rushed to a private hospital in the community.

On Sunday, some angry youths were said to have mobilised to a checkpoint along the Alagbole under bridge, but were repelled by the operatives on duty.

They allegedly regrouped in numbers and attacked the division around 1pm.

It was observed that glasses of the station’s windows had been shattered, while its charge room was in a shambles. An electricity box at the entrance of the charge room was also destroyed.

Windscreens and side glasses of four vehicles parked beside the division were vandalised. Two of the cars reportedly belonged to policemen at the station.

It was  also observed that broken bottles littered a section of the premises, while a television set was smashed by the station gate.

An armed officer said, “We were caught unawares. It was only the S.O. (Station Officer), one or two policemen and me that were at the station when they (the hoodlums) came. They were about 200.”

They entered my office and removed my television set,they  went to other offices and stole television sets and carted away some seized motorcycles on the premises. Their intention was to burn the station, but we were able to disperse them.”

The Ogun State Police Public Relations Officer, Abimbola Oyeyemi, confirmed the shooting of the resident and attack on the division.

Oyeyemi, an Assistant Superintendent of Police, said the perpetrators of the attack would be tracked down and brought to justice.

He said, “There is a black spot in that area, where hoodlums smoke Indian hemp and carry out all sorts of unlawful activities. There have been complaints from residents of the area. That was why the police went to raid the place. It was a raid, involving men from other divisions around the Ojodu Abiodun division, aimed at flushing out those hoodlums.

“In the process, the hoodlums attacked the policemen, throwing bottles and attacking them with cutlasses. A bullet ricocheted and hit somebody while the policemen were firing to scare the hoodlums away. The man sustained a minor injury and was taken to a hospital. He is responding to treatment. He is not among the hoodlums.

“Today (Sunday), the hoodlums moblised themselves and attacked the station. They damaged the station and stole some property. We have identified those behind that dastardly act and we will get them arrested. We will use them as a lesson to those who have the habit of attacking stations. It is an affront on the security agents and they will face the full wrath of the law. If any policeman errs, we have internal mechanism of dealing with them.”

The PPRO said the freed suspects had reported back to the station.