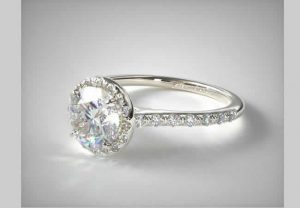 A man has been arrested by the police, for allegedly robbing two banks of thousands of dollars, which he is believed to have used to buy an engagement ring for his fiancée, police said.

The Ohio man walked into the Fifth Third Bank in Trenton on December 16 and handed a piece of paper to the teller that indicated he had a bomb strapped to him and that he wanted $20,000, according to an affidavit filed by police in court that was obtained by the Middletown Journal-News.

On December 22, a man wearing the same jacket and a Titleist hat robbed a U.S. Bank location after saying he had a bomb strapped to his body, the affidavit said.

Police appealed for the public’s help on their Facebook page, and numerous tips came in identifying the suspect as Dustin Pedersen, according to the document.

In addition, images on Pedersen’s own Facebook page also show him wearing the same hat worn in both robberies, officials said.

Pedersen proposed to his girlfriend one day after the December 16 bank robbery, police said.

He bought an engagement ring for about $4,500 less than an hour after the first robbery, officials said.

Pedersen was charged with aggravated robbery for the December 16 incident. He pleaded not guilty.

A warrant has been issued in connection with the December 22 robbery.

He appeared in court for a preliminary hearing, where police said they found the sunglasses, gloves and hat — believed to be worn in the robberies — in Pedersen’s car.

Pedersen reportedly denied robbing any banks, but told police that surveillance photos of the robber look like him.

He has been held in the Middletown City Jail since December 16 on $250,000 bond, and will await grand jury consideration of his case at the Butler County Jail.

Pedersen’s attorney, James Cooney, said his client has been cooperative with police and has been “very calm” throughout this ordeal.

He confirmed that Pedersen purchased the ring he proposed with half an hour after the robbery took place and that Pedersen acknowledged he resembled the person suspected in the December 16 bank robbery.

Cooney said Pedersen’s family has been supportive of him since his arrest and that his fiancée is “upset for all the right reasons.”