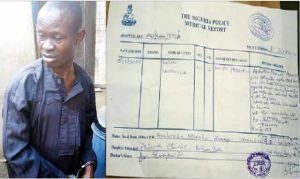 A self-acclaimed apostle has been arrested by the police for the alleged abduction and rape of a 21-year-old woman, Esther, in Ibusa, Asaba, the Delta State capital.

The suspect, identified simply as Paul, had allegedly held the victim captive in his shop for about one week, before he was caught on Thursday.

It was learnt that Paul, who founded the defunct Paul Zion Deliverance Ministry, Asaba, sold scriptural items in the shop, which was opposite a parish of the Living Faith Church Worldwide (Winners Chapel) on Ibusa Road.

Esther had attended a vigil at the Living Faith Church with her family members on Friday, January 12, when Paul allegedly hypnotised and abducted her.

It was gathered that the family members searched for her around the church after the vigil to no avail.

They subsequently reported a case of missing person at the A Division of the Delta State Police Command, while the church prayed for her safe return.

A friend of the victim’s brother had reportedly gone to buy something at Paul’s shop on Thursday when he sighted her and informed the family.

Esther’s elder brother told newsmen that some church workers apprehended the suspect and held him until the police arrived.

The brother, who did not want his name in print, said, “We went for a vigil at our church on Friday, January 12. We could not find her after the service. My sister is a special child. She had convulsion while she was young and it affected her. She can’t read and write.

“Someone saw her at the man’s shop on Thursday and raised the alarm. When we got there, we discovered that the man had bought new clothes for her. She had been hypnotised and refused to follow us. Later, she said the man made her to swear with a Bible that she would not leave him and that if she did, she would die. He should be in his 50s.

“We learnt that he chased away his wife and children a long time ago. He sells souvenirs outside the church (Winners Chapel). The church does not have anything to do with him.”

He said Esther was taken to the police clinic at Asaba, where a test carried out on her confirmed that she was raped.

He added that the medical report would be handed over to the police on Monday (today).

“He calls himself an apostle. We learnt that his church was closed down. We have options to either drop the case or take him to court. For some reasons, we will not drop the case,” he added.

The medical report, indicated that the victim tested positive for “smothered labia majora/minora.”

The coordinator of a rights group, Behind Bars Initiative, Harrison Gwamnishu, said the organisation was closely following the case.

He said Paul attempted to flee when he noticed that luck had run out on him.

Gwamnishu said, “A woman contacted my organisation and linked me up with the brother of the victim. When we got to the man’s shop, the victim was following him around. He has a mattress inside the shop. On our way to the police station, he said God told him to get married to a lady and he felt he could marry her. I called the Investigating Police Officer today (Sunday) to know if she was at the station so I could bring the medical report. But she did not pick her calls.”

The Delta State Police Public Relations Officer, DSP Andrew Aniamaka, said the police had commenced investigation into the matter, adding that the command had yet to establish the rape allegation.

He said, “We are investigating a case of abduction. The victim is suspected to be physically challenged.

“The so called pastor is not a pastor. He has a history of mental illness. Be that as it may, it is not for the police to establish who is mad or not. The appropriate authorities will take care of that. It is case of abduction, which we may have to charge to court.”