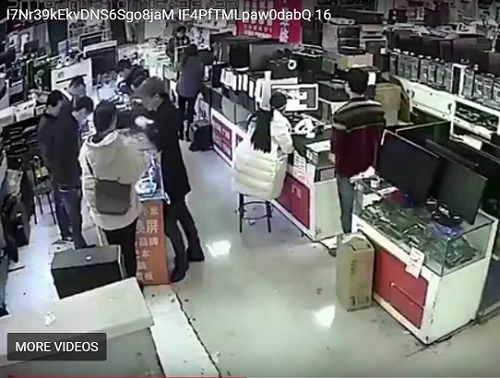 The moment inside the electronics shop when the phone exploded

A man who decided he needed to verify if a smartphone battery was original, and bit it, has seen the battery blow up in his face, according to Yahoo! Tech.

Security camera footage which captured the incident on January 19 at a store in Nanjing City, Jiangsu Province of China, shows the unidentified man biting into the iPhone battery, presumably to check its authenticity.

The move quickly proved to be a mistake, as the battery exploded. Amazingly, the man wasn’t seriously hurt in the blast.

Tech wizards noted that iPhone batteries don’t have much gold in them, but they do contain a lot of toxic items that no one should ingest.

On the rare occasions when a phone explodes, it’s often because the “positive” and “negative” battery plates have become joined, such as if the battery was pierced by a metal object, experts say.

They point out that lithium-ion batteries, though considered very safe, can explode if they’re overcharged.

It’s a problem associated with knock-off battery chargers and other dubious third-party accessories that are rampant in China, which may have explained why the man was biting the battery in the first place.