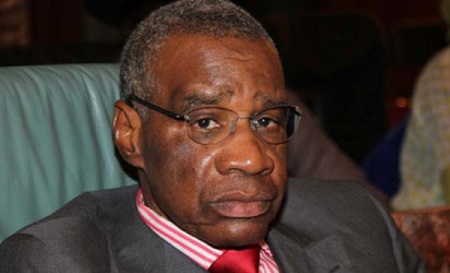 Tears flowed freely as the remains of former Chief Justice of Nigeria, late Justice Dahiru Mustapher, who passed away on Tuesday at a  hospital in London following a protracted illness was buried in Babura, Jigawa state.

The funeral prayers for the late CJN was led by the Chief Imam of Kano Prof. Sani Zaharadeen  at  Kofar Kudu, Kano Emir’s palace  from where the remains was taken to Jigawa state.

President Muhammadu Buhari described the death of late Justice Dahiru Mustapher as a loss to the country considering his contribution to the judiciary and the nation at large.

Also, Kano state governor, Dr. Abdullahi Umar Ganduje described the death of the erudite Jurist as a big loss and has created a vacuum in the judicial service of Nigeria from where the younger generation would have tapped knowledge.

He was at the funeral prayers at the Emir’s palace before proceeding to Babura with his Jigawa state counterpart, Alhaji Badaru Abubakar.