Home News Feed The Heartbreaking Story Of A Man Who Lost His Wife And Children...
Facebook
Twitter
WhatsApp 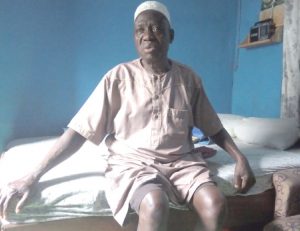 With amazing expertise, Mr. Idris Jimoh Ajibaye, 68, navigated the narrow verandas that ran through the backstreets of the Suru-Alaba area of Lagos.

Though totally blind in both eyes, his gait and mannerism did not immediately give him away as a visually-impaired person. Moving briskly and guided by his brown walking stick, he responded to neighbours that called out to inquire after his wellbeing.

Dressed in a cream-coloured robe with brown leather slippers and a white cap, Ajibaye carefully led the way through a dingy and steep path to his one-room apartment.

Sparingly furnished with a bed, couch, wall fan and a padlocked cupboard that obviously housed his prized possession, this apartment remains his only abode. It is not really a house; it is an office belonging to a Muslim preacher. The owner was kind enough to temporarily give it out to the blind old man after he was evicted from his former house, where he had lived for 30 years.

Ajibaye, a native of Asa Local Government Area of Kwara State, depends on the benevolence of friends, neighbours and well-wishers to survive.

He narrated that he was mysteriously struck with blindness one sunny day on August 17, 1999, and all efforts made to either regain his sight or get to the root of the strange ailment had defied logic since then.

Right now, Ajibaye urgently needs financial assistance to secure a one-room apartment after being forcibly evicted from No. 9, Ayeniero Street, Suru-Alaba, where he lived with his family for over 30 years. According to him, the house was sold in early 2017, without any prior notice given to tenants. The tenants were later given six months to vacate the house. The tenants were also given an additional three months, after which the new owner threatened to demolish the house.

The man informed that the day he was thrown out with his belongings, God sent an Islamic cleric his way, noting that the man offered him his office to stay pending when he would be able to raise money to rent an apartment.

“I moved into this place in December and even though the man has not bothered me, courtesy demands that I get my own place. This serves as the man’s office and since I moved in here, he has been attending to clients in his house. I need help. Sadly, my daughter and her husband are not well off. Though they tend to support me from time to time, I prefer to let them be so that they can plan their own lives,” he said.

Ajibaye recalled that he had just finished supplying sand for a project at the Teslim Balogun Stadium, which at the time was under construction, adding that he had just driven back to the tipper garage located at Tin Can Island when he suddenly went blind.

Said he: “I was paid to supply three trips of sand and immediately I finished and returned to the garage to inquire if there was another job from my co-drivers, I just realised that everywhere suddenly became very dark. I could only hear voices and not see anybody or anything. I was helped home that very day and since then, I have not regained my sight. I really thank God that the calamity did not befall me when I was behind the steering wheel. It could have been a disaster.”

He disclosed that in search of a possible cure, he had visited several spiritual homes, churches and mosques, to no avail. Ajibaye said he has also been to virtually every specialist hospital in the country, yet none of them could rightly diagnose the cause of his blindness.

His words: “Nothing was ever seen or detected. I have been to the Lagos University Teaching Hospital (LUTH), the Lagos State University Teaching Hospital (LASUTH), St. Mary Hospital, Ago-Iwoye, and Ilorin General Hospital. I have also travelled to Kano State in search of a cure. I don’t feel any pain in my eyes, no itch and it does not discharge water or fluid. The doctors were always left baffled.”

As if losing his sight was not enough, Ajibaye said over the years, he was visited by several losses, which he was yet to recover from. He informed that in 2007, he lost his wife, Nuratu, who selflessly stood by him and took care of his needs after a prolonged sickness. His first and only son, Ahmed, was killed in an auto accident along the Lagos-Ibadan Expressway in 2002, he said. At the time, he was 30.

Ajibaye disclosed that before then, he had lost his first daughter, Shakirat. His only surviving daughter, who is married to an Igboman, is barely surviving with her children, he said.

Speaking on how he had survived his ordeal for this long, Pa Ajibaye said he does not cook so as not to set himself or the house ablaze, adding that he usually got cooked food from vendors within area.

“I also do not use electric bulb or any form of light since I cannot see anything. The only thing I know how to operate is my wall fan.

Lamenting how all his attempts to get help from the state government proved abortive, Ajibaye said he wrote several letters to Mr. Babatunde Raji Fashola when he was the governor of Lagos State but did not get any response. He said even those written to the present governor, Akinwunmi Ambode, and his counterpart in Kwara State, Abdulfatah Ahmed, were yet to be responded to.

With the rainy season closing in fast, Ajibaye is appealing to well-meaning Nigerians to come to his aid. He disclosed that his temporary abode is heavily flooded when it rains and he might end up losing the little property he has. He said that, with N300,000, he could get an apartment and see where life would take him from there.

“I know Nigerians are good people with good hearts. Nothing is too small to help me with. Nigerians should not let me be thrown into the streets, where my death will be imminent. They should not let be become destitute in this age. I am pleading for help and I know God will bless those who are touched to help me,” he said.