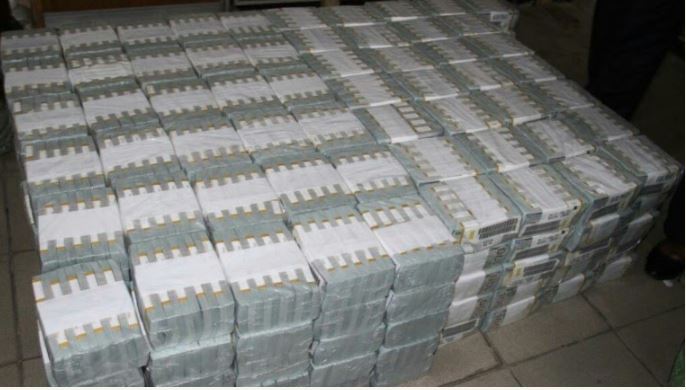 The National Security Adviser (NSA), Gen. Babagana Monguno, has ordered that the cash be kept in protective custody pending the conclusion of investigation by the Economic and Financial Crimes Commission ( EFCC).

The EFCC has grilled two Acting Directors-General of NIA, Amb. Arab Yandam and Amb. Mohammed Dauda over the failed moves to pick the cash by some vested interests before the resumption of the new DG, Amb. Ahmed Rufai Abubakar, last week.

A source said: “We have started investigation into the circumstances behind the purported removal/withdrawal of $44million from the vaults of the National Intelligence Agency.

“Based on the prompting of some vested interests, the cash was already removed from the vaults but the process of taking it out of the agency was halted. The plot was to seize the cash before the resumption of the new DG.

“The NSA, Gen. Monguno, whose office also supervises the activities of NIA, has ordered the relocation of the cash to a safe custody pending the conclusion of investigation by EFCC.”

After the exit of a former DG of NIA, Amb. Ayo Oke, it was learnt that more than  $44million was found in the agency’s vaults, which the ex-Acting DGs did not spend.

But that some “forces” wanted the cash disbursed on “extraneous projects” but Dauda resisted the pressure. The EFCC has been mandated to look into the circumstances behind the failed plot to withdraw the $44m.

Apart from the two ex-Acting DGs, some top officers of NIA have been invited to shed light on the issue.

Another highly-placed source privy to the investigation said: “ We have invited and interrogated two former Ag. Directors-General. They are Amb. Arab Yandam and Mohammed Dauda. While Yandam came last Thursday, Dauda was grilled on Friday and Saturday.

“They volunteered useful information to the Commission but investigation is still ongoing and more people are being invited to assist our detectives.

“One of the former  Ag. Directors-General opened up with facts and figures. From the clues at our disposal, prior to the withdrawal of the $44million, there was pressure on him to remove a director.”

The source added: “We have also invited the immediate past Director-General of NIA, Amb. Ayo Oke, in connection with the $43.4million recovered from a flat in Osborne Towers in Ikoyi. On four occasions, he has refused to honour EFCC’s invitation. He was also invited last Friday but he is yet to respond.

“We are suspecting that he is trying to frustrate our investigation.”

But another source said: “Oke could not have appeared before EFCC because the Presidency is now handling the matter.”

There is tension in the NIA over likely reorganisation and retirement of some top officers, following the appointment of Ahmed Rufai Abubakar as the substantive DG .

Apart from the need for surgical reforms in the NIA, a Presidency source confirmed last night that the new DG was given a “Grade A security clearance”.

A source said: “There is tension everywhere in NIA because the DG was once an officer of this outfit who worked under some people in the management.

“The fears also border on the planned sweeping reorganisation of the agency which may be targeted at some of these  top officers.

“The appointment of Abubakar has caused disquiet with a lot of issues cropping up within the agency. The management members and staff are sharply divided on the new DG who was one of them.

“There has been pressure on President Muhammadu Buhari to reverse the appointment, but there were strong indications last night that President Buhari won’t reverse it.

A Presidency source said: “Contrary to misgivings, the President personally picked the new DG because of his invaluable contributions to the government and his gift of speaking many languages. He used to translate many documents for the government. He is also a workaholic.

“Also, the candidate went through many security checks before the President opted for him. None of the screening indicated that he is a security risk to Nigeria. All the allegations of his link with Chad or Morocco are balderdash. This DG is a  Nigerian through and through.

“The DG was shocked about what is being written about him in the media. I can say clearly that this appointment is based on merit. You cannot work with Abubakar without learning new things.

“Some of us are happy that one amorphous organisation has gone to court. By the time Nigerians see the documents the Federal Government will file on the appointee, they will be shocked by his  rich credentials.

A group called Concerned Nigerians sued President Buhari on the appointment of the new DG. Other defendants are Ahmed Rufa’i Abubakar (Director General of the National Intelligence Agency) and the Attorney-General of the Federation, Abuubakar Malami

The suit was filed by Michael Ukasare and Arinze Solomon Egbo on behalf of the plaintiff, Deji Adeyanju, for Concerned Nigerians.