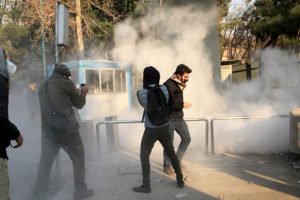 The UN Security Council will hold an emergency meeting Friday to discuss the wave of protests in Iran.

US Ambassador Nikki Haley warned ahead of the meeting that the demonstrations could escalate into full-blown conflict, drawing a comparison with Syria.

“The world has witnessed the horrors that have taken place in Syria, that began with a murderous regime denying its people’s right to peacefully protest,” Haley said in a statement late Thursday.

“We must not let that happen in Iran.”

A total of 21 people have died and hundreds have been arrested since December 28 as protests over economic woes turned against the regime as a whole, with attacks on government buildings and police stations.

The United States formally requested the meeting on Thursday, but Russia and some of the other council members are not convinced that the top UN body should discuss the unrest in Iran, diplomats said.

Russia has criticized the US push for Iran to be discussed at the Security Council and accused Washington of interfering in Iran’s domestic affairs after President Donald Trump backed the anti-government protests.

Diplomats said they expected Russia to request a procedural vote at the start of the meeting to decide whether the situation in Iran should be on the council agenda.

For a new agenda item to be discussed at the Security Council, at least nine of the 15 council members must support holding the meeting. No vetoes apply.

“This is a matter of fundamental human rights for the Iranian people, but it is also a matter of international peace and security,” said Haley.

“It will be telling if any country tries to deny the Security Council from even having this discussion, just as the Iranian regime tries to deny its own people the ability to have their voices heard.”