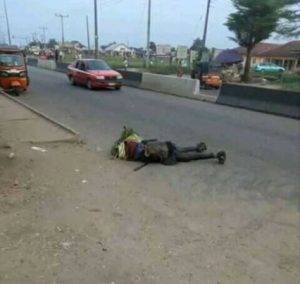 A masquerader festival in the Umutogume village,was marred by violence in the Oguta Local Government Area of Imo State, with two persons confirmed to have died as violence erupted.

According to eyewitnesses, a masquerader and her team attacked the festival to avenge the death of another masquerader that died on Saturday while performing during the masquerade festival.

A source said when the new masquerader attacked the festival, which was still ongoing on Monday, two persons were shot dead, while others were injured.

It was gathered that the attacking masquerade and his team used AK-47 rifles and other weapons during the reprisal.

Our correspondent learnt that among the victims were an octogenarian, Priscilla Chije, whose bones were reportedly shattered by bullets; and her 44-year-old son, Onyeka Chije, who was riddled with bullets.

A commercial cameraman who was covering the festival was said to have been shot in the head.

A villager, who identified himself as Ike Uzo, said a masquerader, known as Udebube from Abatu village, who was among other masqueraders performing during the festival at Umutogume village, suddenly collapsed and died, fuelling the suspicion that he was killed with juju by the host masquerade from Umutogume.

He said, “Members of the deceased masquerade’s team went back to their village where they hired some gunmen and attacked the village two days after the incident, while the festival was still going on.”

An elder brother of one of the deceased victims, Samuel Chije, said the new masquerader and his team from Abatu villge were accompanied by gunmen, adding that they stormed the festival and opened fire on the people.

“My brother was at his place of work when he heard that our mother was hit by a stray bullet; he rushed home and the gunmen saw him. They opened fire and riddled him with bullets. My cousin, Chidel Chije, sustained severe gunshot injuries.

“We know the identities of the gunmen because we have the video clips,” he said.

The state Commissioner of Police, Chris Ezike, told our correspondent on the telephone on Tuesday that arrests had been made.

He said, “Two persons were killed. We have made some arrests and I have sent a stabilisation team to the community to avoid reprisal from any of the two affected villages.

“I met with stakeholders from the areas on Monday, including the traditional rulers, the member representing them in the Imo State House of Assembly and the transition committee chairman of the Oguta LGA.

“Masqueraders’ trouble is becoming a recurring decimal in Oguta; it will be appropriate for the masqueraders, who belong to the kingdom of the dead, to rest there while the living enjoy some peace.”

Share
Facebook
Twitter
WhatsApp
Previous articleOMG!!! Wife poisons her husband, 2 weeks after wedding
Next articleGifty finally speaks on having a baby and her relationship with Mr. 2kay
- Advertisement -