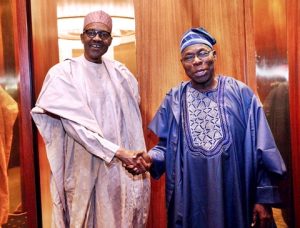 The Federal Government on Wednesday responded to claims that the administration of President Muhammadu Buhari had been a failure.

The latest attack on President Buhari’s administration was by a former president of Nigeria, Olusegun Obasanjo, on Tuesday he called for Buhari to step down as he had a poor grasp of economics, foreign affairs and Nigeria’s complex internal politics.

The 75-year-old Buhari “needed a deserved rest”, his 80-year-old former military colleague suggested, and asking Nigerians to return him for four more years was “unrealistic”.

Obasanjo retains an influential role in Nigeria’s patronage politics and his criticisms have been seen as a possible way of bringing in contenders to challenge Buhari.

On the economy, too, he said the government was making “steady progress” and that “Nigerians will definitely get a new lease of life a short while from now”.

“This administration is not unaware of the enormity of the challenges facing the nation but we are up to the task,” Mohammed said in an emailed statement.

“We have taken the bull by the horns and long-suffering Nigerians will begin to experience a new lease of life as our efforts yield fruits.

“We will not go into a state of funk for whatever reason.”

Buhari, who like Obasanjo headed a military government before being elected civilian president, spent much of last year being treated for an undisclosed illness in London.

He has made few public appearances since his return in August, prompting speculation about whether he is strong enough to endure the rigours of an election campaign.

There have been indications, too, that his wife, Aisha, will not back a second, four-year term of office. She has criticised the so-called “cabal” of advisers around Buhari.

His close ally Mohammed said the issue of whether Buhari will stand again was “a distraction for the president at this time”.

“This is because Mr President spends every waking hour tackling the enormous challenges facing the nation, most of which were bequeathed to his administration by successive past administrations,” he added.

“He is committed to fulfilling the mandate given to him by Nigerians in 2015. And that’s where we are right now.”