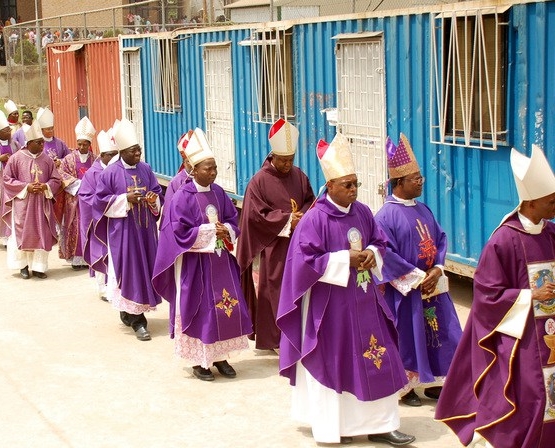 Some Catholic Bishops on Sunday condemned the inhuman treatment meted on Nigerians working and living in Libya, describing the act as horrific.

Joseph Bagobiri of the Catholic Diocese of Kafanchan, Adewale Martins of Catholic Archdiocese of Lagos, and Alaba Job of Ibadan condemned the modern slavery in separate telephone interviews with the News Agency of Nigeria, NAN.

The clergymen said they were shocked that such act of man’s inhumanity to fellow humans in this age and time was happening in a member- country of the African Union (AU).

They called on the federal government to initiate and implement measures that would discourage Nigerians from seeking greener pastures in countries where they ended up being sold as slaves.

NAN recalls that the federal government has repatriated over 6,000 Nigerians from Libya as at end of December 2017.

Mr. Martins said that such indignity being meted on Africans by fellow Africans was not only repulsive but evil.

He urged the federal government to declare a state of emergency on the economy so as to rescue the nation and set-up a realistic road map that would stabilise the naira.

“Our people are going hungry daily, our youths are dying in their quest for better options to life outside our shores and yet our leaders appear more concern with how to clinch to power.

“I think the time has come for all of us to reason together to resolve and restructure the lopsided political structures we are currently operating and set up realistic goals that would help move us forward,’’ he said.

Mr. Job, an archbishop emeritus, said that selling of Nigerians into slavery in Libya was “very horrific and really bad’’’ in this age and time.

He said that there was nothing wrong with people relocating from one country to another but warned such intending emigrants to be sure of happenings where they intended relocating to.

He decried the ill-treatment meted out to Nigerians that resulted to loss of lives as well as being subjected to slavery in various detention camps in Libya.

“The Nigerian government should rise up to defend its nationals in Libya not only by repatriating them.

“The government should make Nigeria conducive to live by providing good job opportunities, security and other necessities of life for its citizens.

“For Libya to be selling Nigerians as slaves in that country leaves much to be desired,” he said.

Also speaking on the trend, Julius Adelakun of the Catholic Diocese of Oyo urged the federal government to encourage youth to join in building the Nigeria of their dreams.

“Many Nigerians are travelling to developed world to enjoy the development put in place by their governments but we have refused to develop our own country.

“Let us start to develop ours to make it attractive and conducive for living so that foreign nationals will want to come,’’ he said.

Mr. Adelakun also advised the government to provide job opportunities for the youths, saying that such would discourage them from seeking greener pastures outside Nigeria.

Mr. Bagobiri condemned the treatments meted on Nigerians in Libya and described the inhuman treatments as “unfortunate’’.

The cleric wondered why an able-bodied person would waste close to half a million naira in search of elusive greener pastures in Libya.

“If such individuals had invested these amounts positively and creatively in Nigeria in viable business opportunities, they will have become employers of labour.

“They would have commanded respect in their father’s land instead of being subjected to slavery and other forms of inhuman treatment by Libyans,’’ he said.

Mr. Bagobiri said that the federal government should correct the perception being held by intending youths aspiring to travel outside the country in search of the greener pastures.