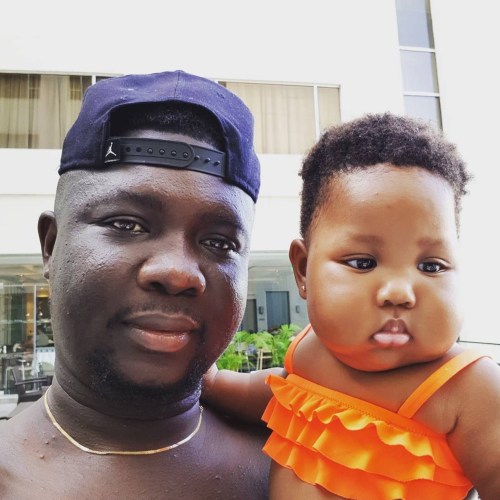 Comedian Law and his daughter, Tiwa

Comtroversial journalist and daughter of former Oyo state governor, Kemi Olunloyo, was released from the Port Harcourt Maximum Prison, few days ago and she begged Nigerians for financial assistance to cater for her medical expenses.

Popular Nigerian comedian, Seyi Law, in spite of the long-drawn spat between him and Kemi, was one of those who quickly responded to the cry of the controversial blogger.

Recall that the feud between both of them began after Kemi expressed concern about the health of Seyi Law’s daughter, Tiwa. She said the child was obese, suggesting that she might be suffering from a health disorder. After several weeks during which both parties exchanged words on social media, they made up.

Perhaps to prove that his daughter had indeed forgiven Olunloyo, Seyi Law offered a helping hand by donating all the money in Tiwa’s account to Olunloyo. He told Sunday Scoop that he decided to assist the blogger with funds belonging to his daughter, because she was treated unfairly and it could have happened to anyone.

While speaking with PUNCH newspaper, the comedian stated, “I think our previous issue was due to a breakdown in communication and I am not sure there is anyone who is happy that she was imprisoned for a long time. I didn’t even want the news that I gave her money to be made public, but you know Aunty Kemi has a way of doing things. She decided to put the information out there. I feel anyone can be of help to anybody. We’ve settled our issues and besides, this is a new year.”

According to Seyi Law, Olunloyo told him all the agonising things she went through in prison. The comedian said, “I spoke with her and she told me a lot of the things that happened at Port Harcourt Maximum Prison. The stories are not nice at all. She is even afraid for the people she left there. A prison is supposed to be a place where people get reformed. There is a lot to be done in our prisons and we should not forget that prisoners are also human beings.

“No one is perfect, but if someone, who was not supposed to be detained for more than 48 hours, spent six months in prison, then, there is a problem. Whether the person is wrong or not, the judicial system is faulty. Everyone should be given the benefit of doubt, at least until you are proven guilty by the court. Nobody is above the law, but in a situation where you don’t follow the recommendation of the law, it is not only an offence to the person involved but to Nigerians as a whole.”