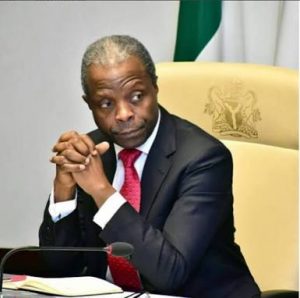 Vice President, Yemi Osinbajo said on Monday that he received no letter from Governor Samuel Ortom warning him of imminent attacks by herdsmen on Benue communities.

Mr. Osinbajo said he was “shocked” to read in the media that he was put on the notice that herdsmen were plotting to strike across the state but did nothing.

“It will be a terrible falsehood to suggest that the VP was ever informed by the Governor or anyone else of the imminence of the killing of citizens of our country in those or any other local governments in Benue State,” presidential spokesperson Laolu Akande said in a Monday afternoon statement.

Mr. Ortom had reportedly told the Senate committee investigating the recent killings in Benue that he warned Mr. Osinbajo in his capacity as acting president while President Muhammadu Buhari was away on medical leave last year.

“We wrote to the Vice President on the planned attack on parts of Benue by Fulani herdsmen, because the word was everywhere on the street, but he refused to reply,” the Guardian quoted Mr. Ortom as saying in his submission to the Senate panel, led by its majority leader Ahmed Lawan.

“When there was no response, and upon the return of Mr. President, I personally went and intimated him, and also wrote. The documents are here, I will hand them over to you. I wrote to him on the planned attack by Fulani herdsmen because these threats were on the streets,” Mr. Ortom added according to The Guardian.

But Mr. Osinbajo strongly denied the allegations, saying he received a letter of complaints about public utterances of some herdsmen; but not about specific budding attacks.

“Governor Ortom wrote to the Vice President, then Acting President, on 7th June 2017 protesting a newspaper publication where the leadership of Miyetti Allah was reported to have stated that it was opposed to the Open Grazing Prohibition law of the State and that they would mobilise to resist the law.

The Miyetti Allah had written to the vice president on June 5, 2017 on the same law protesting several sections of the law. The governor went on to say that the leadership of Miyetti Allah should be arrested because they used words such as “wicked, obnoxious and repressive,” to describe the law, and because these were “utterances that are capable of undermining the peace…”

“The Vice President subsequently met with the Governor, discussed the matter and the security situation in the State and then ordered law enforcement agencies to be on the alert to prevent any attacks or violence. This was in June 2017!

“In the said letter written by the Governor, there was no mention of any threat to any specific one of the 23 local governments of Benue State, so the best the law enforcement agencies could do even then was to await information or intelligence of an imminent attack. None came.

“Since then the VP has held several meetings with the Benue State Governor, including a visit to the State on the 6th of September, last year at the behest of Mr. President during the tragic floods in the state last year. At all such meetings, the Vice President discussed the security situation of the State with the Governor.

“Following that, the then Acting President convened a major national security retreat which was attended by all State Governors, service chiefs and heads of security agencies. The Retreat featured very detailed discussions on the herdsmen/ farmers’ clashes.

“To the best of our knowledge, neither Governor Ortom nor the Federal Government was aware of the imminence of the cowardly attack on Logo and Guma on the 1st of January, and therefore any suggestion that the President or the Vice President ignored the State Governor’s warning is both absolutely false and certainly misleading,” Mr. Osinbajo said.

Still, the vice president said he still doesn’t believe that Mr. Ortom made the remarks credited to him.

Terver Akase, a spokesperson for Mr. Ortom, tried to walk back the comments of his principal in an interview with PREMIUM TIMES Monday afternoon.

“We didn’t warn the vice-president,” Mr. Akase said. “We only copied him in a letter to security agencies.”

“Some Fulani herdsmen were threatening Benue State. As the chief security officer of the state, he wrote to the police inspector-general and the National Security Adviser then copied the acting-president in the letter at the time,” Mr. Akase added.

Over 50 residents were killed when suspected herdsmen invaded villages in Logo and Guma Local Government Areas in Benue State on New Year’s Day.

The state government conducted a mass burial for the victims in a village near the Air Force Base in Makurdi, the state capital, on January 12.

As part of his administration’s response to the incidents, President Muhammadu Buhari on January 9 ordered the immediate relocation of Inspector-General of Police Ibrahim Idris to Benue.

Mr. Idris, who arrived the state on January 11, said he had deployed over 660 police officers in more than 10 units across the state, promising to deploy additional officers to five more units in the coming days.

President Muhammadu Buhari says he is saddened by murder of Lawan Andimi, chairman of the Christian Association of Nigeria (CAN) in Michika local government...
Read more

A former Head of State, General Abdulsalami Abubakar (rtd), says the country is presently at a crossroad with the myriad security challenges. The former head...
Read more

Enugu Is The Only State That Can Survive Without Federal Allocations: Governor

Ifeanyi Ugwuanyi, the governor of Enugu state, says the state is the only Nigerian state that can survive without allocations from the federation accounts...
Read more
- Advertisement -