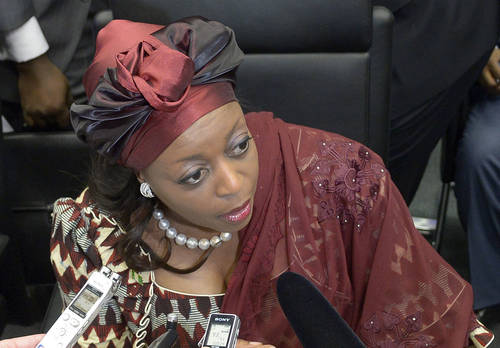 Former petroleum minister Diezani Alison-Madueke, has accused the EFCC of displaying lack of understanding of the constitutional powers of a president in managing funds meant for security and intelligence agencies.
She said this in response to a report that she withdrew $1.3 billion from the account of the Nigerian National Petroleum Corporation (NNPC).
In a statement issued on her behalf by Clem Aguiyi, her media aide, the ex-minister said the anti-graft agency ought to seek clarity about the process for release of funds requested by security/intelligence agencies.
Quoting section 5 of the constitution, Alison-Madueke said all executive powers are vested in the president who may exercise it directly or through the vice-president or ministers.
She argued that as minister of petroleum resources, she was an appointee and delegate of the president.
“On the issue in question, the minister of petroleum resources acted on the basis of the written approvals and directives given by the president, which approvals were given after written requests from the relevant security agencies were made to the president,” she said.
“At such instances, as in fact the article clearly shows, a service chief or intelligence chief, makes a written request/appeal to Mr President outlining whatever urgent and critical security needs of the nation they consider imminently paramount, at any given point in time.
“If such a request received the approval of the president, the president may direct that the requested funds be drawn from a security budget maintained by NNPC, or that the funds be sourced from elsewhere.
“Where the president directs the minister of petroleum resources, in writing, to make the payment from the NNPC, the minister in turn, directs the GMD NNPC in writing to execute the directive of the president. NNPC then wires the funds from one of its major foreign bank accounts, or from the CBN, directly to the stipulated account of the particular branch of the armed services, or intelligence unit, or department, that initiated the request.
It is not within the powers or discretion of any minister to question, flout or disregard the written directives of the president, including that of the incumbent president.”
The former minister maintained that at no time did she interfere with this process.
“It is therefore, impossible and implausible, for any monies under such presidential directives to be diverted during the process, at least from the standpoint of the minister. Any and all amounts approved and directed by Mr. President to be paid, were executed exclusively by NNPC, directly from NNPC’s foreign and or, Central Bank of Nigeria accounts, to the stated recipients,” she said.
“Therefore, let it be very clear, that all funds disbursed by these banking institutions on behalf of NNPC are easily and openly traceable, and the process cannot and should not be utilised for the distortion of facts, vendetta or political mischief.”