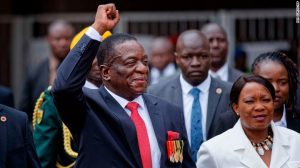 President of Zimbabwe , Emmerson Mnangagwa, said Wednesday that the country would go to the polls before July, in the first elections since Robert Mugabe was ousted after 37 years in power.

Mnangagwa, who took office in November after a shock military takeover led to Mugabe’s ousting, promised to hold a fair vote.

Under Mugabe, who had ruled since 1980, Zimbabwean elections were marred by vote-rigging, intimidation and violent suppression of the opposition.

“Next month I will be able to make a proclamation of elections, so I believe that elections will not be in July, they will be earlier than July,” Mnangagwa said the World Economic Forum in Davos, Switzerland.

“We want to have free, fair, credible elections, free of violence,” he said, adding he would welcome international observers.

“If you have that criteria, why would you want to deny international observers coming into our country? The EU… I would welcome them.” he said.

The vote, previously expected in late July or August, will elect the country’s president and both houses of parliament.

Mnangagwa, 75, was one of Mugabe’s closest allies in the ruling ZANU-PF party, and he is accused of playing a key role in Mugabe’s authoritarian regime that left the economy in ruins.