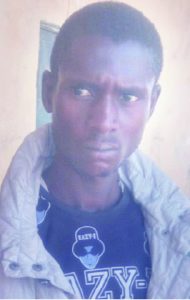 The abominable intimacy between 44-year-old Viashima Titus Ukegi, indigene of Awe Local Government Area of Nasarawa State and his daughter has burst into the open as the teenage girl is now pregnant.

Ukegi’s wife, Cecilia Torkwase, died soon after giving birth to their daughter, Mary Doosur Ukegi in 2001, as a result of complications that arose from the prolonged labour that lasted one week.

With no formal education, Ukegi’s engaged himself in farming and supplemented his income with petty trading carried on through his store. Following the death of his wife, Ukegi’s mother took up the responsibility of nursing and raising baby Mary in her room until she was about five years, when she herself also died.

After the death of his mother, Ukegi relocated the daughter to his own part of the family house and the two shared the room until she attained puberty and moved out to another room. Ukegi, as Sunday Sun gathered, did not enrol Mary in school but rather confined her to doing domestic chores and looking after the shop.

As Mary continued to mature physically, the devil planted the evil seed of lust in the mind of her father, who began to desire her in an inordinate manner. And one night, he made the move to have carnal knowledge of the daughter, an act that was repeated after the first time.

While wiping away tears, she told the sordid story of how the father impregnated her: “Before this thing happened, if anybody had said to me that a father and daughter could engage in this type of relationship I would have said that person must be sick. Now the result of what happened has filled me with shame and destroyed my life.

“Ever since I have been living with father from childhood, I have never seen him with a woman friend and he did not make any effort to remarry after my mother died. He always had a good harvest and made money, but he never sent me to school. But he gave me good care and insisted that I should not have any problem; he used to tell me how good my late mother was to him.

“We were very close like a normal father and daughter, and I thought he was taking care of me as a father but somehow he became attracted to me. Then, one evening, after taking my bath, I tied my towel around my armpit, to cover my breast and my waist. As I walked through the palour to my room, he looked at me in a particular way and called me to come close. He said he noticed a mark on my neck. When I went close, he touched my breast and said something funny. He used to say funny things to me.

“All through that day, which was a Sunday, he was indoors. Later that night when I was about to sleep, he came to my room with biscuits and a bottle of coke and insisted that we take it together. As we were drinking the coke, he began to touch me all over my body as we were sitting together on the bed.

“It was very confusing and I tried to suppress my feelings. He told me how he felt about me and I was shaking. Somehow, I knew that what was about to happen was wrong. He said he was in love with me but didn’t know how to disclose it to me. He said that he was delighted that we were together.

“Then he kissed me for the first time while running his hand over my body. Suddenly he pulled off his trouser and attempted to enter me, because I was still a virgin. It was strange and the pain was very much. He took my Vaseline and rubbed on my private part and tried again. He pressed hard and then deflowered me. The pain was so much that I did not come out for about three days. He consoled me and gradually the pain went away.

“From then on we kept meeting regularly and each time he wanted to have sex with me, I would tell that we were committing sin. Despite knowing that loving my father in this way was completely wrong, the sex was very passionate.

“After I had intercourse with my father, I knew I was totally in love with him. It was amazing. We both knew it was wrong but we thought we could keep it a secret. My dad made me feel important, he told me how clever, funny and pretty I was, he worshipped me and it was the best relationship I had ever had.

“If he went somewhere I would become so excited to see him. We were just like any other couple, apart from the fact he was my father. Eventually I missed my period and before I knew it, I was three months pregnant. Before people in the village could notice what happened, he took me to his friend in Kadarko and warned me not to abort it. He enrolled me to learn tailoring. In fact, he wanted me to deliver the baby and he kept checking on me regularly in Kadarko where I was learning tailoring before the invasion of the area by herdsmen and we decided to relocate to Daudu, Guma LGA for our safety.”

In her private moments, Mary would wonder if she should give birth to a baby belonging to her father, but since he insisted, she had no choice and allowed the pregnancy to grow and it is now five months.

At the IDP camp set up at the old local government secretariat, Awe, where Ukegi is currently residing, he spoke with Sunday Sun: “As I speak to you, I feel like my whole world has crumbled before me. It is like a nightmare I wish I would wake up from. How can this be happening to me in real life? It was a terrible thing that in my mind I was like I was seeing my late wife. My daughter had very good shape, well structured, and reminded me of her mother and I was feeling bad that one day somebody will enjoy her, so I decided to take my own share and that resulted to pregnancy.

“I actually wanted her to abort it but she did not tell me on time and I did not notice. She told me after about three months or more and I entertained fears that trying to abort it may be dangerous and I decided to take her out of the village to Kadarko, enrolled her to learn tailoring and then deliver the baby there, but the herdsmen have displaced people in the area and she has moved to Daudu to meet one of my relations.

“Any time I reflect about my affair with her, I feel very bad but the damage has been done. I didn’t want to take further risk that would take her life. The daughter of one of my brothers committed abortion and died from the complication. So I learnt a lesson from that ugly experience. Moreover, her mother died after giving birth. I know that what I did was wrong but my daughter did not put any serious resistance when all this started which paved the way for the devil to come immediately.

“So I have decided that she should deliver, then I will take care of the child while she goes back to continue her training and from there she can get married. I have decided not to marry because any time I think about it, it reminds me of my late wife, so I want to respect her even in her grave. But what happened is unfortunate, but it has happened and God will have a way of taking care of it.”

But another man in the camp, who is from the same village with Ukegi, who claimed to be his brother and friend revealed that his late wife was pregnant before she got married to him.

The friend, Donald Ageebe, 46, said Ukegi had serious problems getting married when he was coming up as a young man. He explained further: “All his age mates got married very early in the village but he had that problem. We didn’t know what the problem actually was; any girl he approached would reject him. So his wife was two months pregnant before she got married to him, we all knew it then and he was not the only one. So many young people in the village got married through such means and we used to joke about it by saying that the person bought a new torch with battery intact.

“So we are convinced that is his reason for doing that wicked act, but that is up to him.  That is all I know about it. We knew the wife was pregnant when he married her. She was forced to marry him because the person that impregnated her denied and ran away. So, her parents for fear of shame compelled the girl to marry Ukegi who was at the moment desperate to marry.”

Though Ukegi has denied that his lustful desire for the daughter was not driven by the fact of his not being biologically connected to Mary, he has insisted that it was the result of a terrible mistake. He confirmed that his late wife was actually pregnant before she married him but stressed that it was the norm in the village.

“I was not the only person in the village who married that way and those children are still there till date as legitimate and biological people of that area, it was just a mistake. I hope other people in my situation will realize this thing cannot be a one-off thing. And have the courage to overcome their feelings, walk away and not act on the devil’s promptings to do this kind of thing like I did,” Ukegi said, regret written all over him.