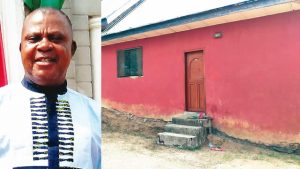 A 62-year-old man identified as , Mr. Vitalis Okoro, was murdered by suspected assassins in Calabar, Cross River State, after chasing away his son on Wednesday.

It was learnt that the assailants, after killing Vitalis in the bedroom, dragged the corpse into his Toyota Sequoia and drove some distance away from the house on Anaku Street, in the Ikot Effanga Mkpa area of Calabar.

It was gathered that they abandoned the corpse after the fuel in the vehicle finished.

The slain businessman was a cement dealer who had a block moulding industry which later collapsed.

The victim’s three-bedroomed bungalow was said to have been built in an unfenced plot of land.

Our correspondent gathered that the assailants gained access into the house after destroying the burglar-proof window bars in the sitting room.

From the photographs made available to PUNCH Metro, Vitalis’ neck was tied with a blue piece of cloth, while there were several cuts on his body.

An eyewitness, who spoke on condition of anonymity, said she heard a scream from the victim’s house around 4am, and shortly afterwards, some persons opened one of the doors, dragged the body into the parked car and drove out of the compound.

She said, “I heard someone scream at about 4am and when I peeped through the window, I saw his car outside. I didn’t know what was happening. Shortly afterwards, some people opened one of the house doors and dragged his body out. I guess they entered the building through the back.

“I wanted to call the police, but I did not have credit on my telephone line. Even if I had, I am not sure I would have achieved anything because they left shortly afterwards with his body in the vehicle. That means they had already killed him before bringing him out. I learnt in the morning that they chased the son out of the house before killing him.

“After the incident, my son called to inform me that they abandoned his corpse in the car. He said they left the key in the ignition.”

The younger brother of the deceased, Mr. Moses Okoro, said he learnt about the murder around 8am through a telephone call from a friend.

He said he immediately rushed to Vitalis’ house, where he met the abandoned car on the street with bloodstains in the back seat.

Moses said the victim was not in good terms with his wife who had been invited by the police and was being interrogated at the State Criminal Investigation and Intelligence Department of the Cross River State Police Command, Calabar.

He added that the victim’s block moulding business had shut down in Calabar and there were plans to relocate him to their hometown in Owerri, Imo State, when the incident happened.

“My brother was at loggerheads with his estranged wife in the last four years. She had three children for him. All attempts to bring them back together had failed because she refused. The police have already invited the woman for questioning.

“About two weeks ago, we concluded that he would relocate to Owerri and I would help him with a business, but after a while, he would sell his house in Calabar to support his new business life,” he said.

The state Police Public Relations Officer, Irene Ugbo, confirmed the incident, adding that investigation was ongoing to unravel those behind the murder.