#BBNaija: Ahneeka Blasts Teddy A, Says He Has No Respect For Women 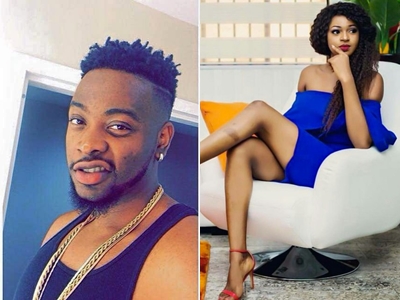 Ahneeka who has been quiet in the Big Brother House most of the times since the show started. She has finally revealed her true self after she went angry on Teddy A.

All this happened just a few minutes after this week’s Friday night PayPorte arena games had been completed, Teddy A told Ahneeka not to be silly and Ahneeka interpreted it like Teddy A told her she’s silly.

It was then that Ahneeka got so ballistic and blasted Teddy A, she went saying that Teddy A has no respect for women at all. Ahneeka told Teddy A that he’s f*cking stupid.

She was so furious as she jumps all around the house like a chicken that has no head throwing tantrums in all directions, big Bitto tries to calm her down but she was uncontrollable.

Finally, she maintains her cool and she went to sit down next to Angel who gave her his support and calmed her down, Angel told Ahneeka that whatever Teddy A said was his own opinion.

Leo also came around to Ahneeka and told her that Teddy A didn’t abuse her, Leo was of the view that all Teddy A said was “don’t be silly” meaning he didn’t directly say that Ahneeka is stupid.

At the moment Ahneeka wasn’t buying any of Leo’s words and she kept on saying Teddy A had insulted, Leo then decided to leave.

Poor girl Ahneeka kept on ranting as she sat next to Angel even going as far as saying that Teddy A doesn’t respect women at all and that she had observed since they all stepped into Biggie’s house.

Ahneeka also said that she had observed the way Teddy A speaks to Bambam sometimes and it was all disrespectful.

Share
Facebook
Twitter
WhatsApp
Previous articleHushpuppi blasts Rapper MI, says You too can make it like me
Next articleThe Victorious Moment Man Won The 2018 Lagos City Marathon To Take Home $50,000 (Photos/Video)
- Advertisement -Ad ==> Discover how a young Nigerian graduate now makes a consistent 40k per week doing a legitimate online business. You too can start yours now, click here!!!