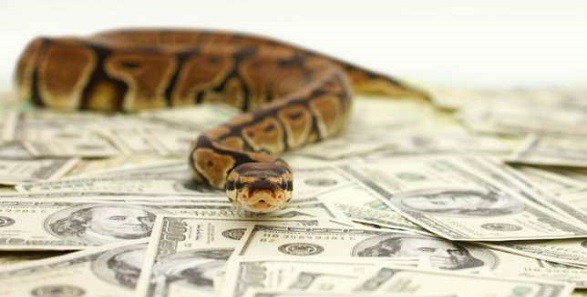 A Facebook user Eric Uchenna Chimara, has given some reasons why we should not doubt the story that a snake swallowed 36 Million Naira

If you don’t get the gist, let’s do a little recap..

Few days ago, the Nigerian media went agog when reports emerged that The management of Joint Admissions and Matriculation Board, JAMB, is yet to come to terms with an explanation by an official in the Makurdi, Benue office of the Board that proceeds from the sale of admission scratch cards in the state, totaling N36million have been swallowed from the cash vault by a mystery snake that comes in the night Read full story here.

Now, here’s why Eric feels we shouldn’t doubt the story ;

Fish swallowed a full fledged man and dropped him harmlessly ashore somewhere in the middle east- You believed it.

Snake engaged in a discussion with one woman like that and convinced her to eat a forbidden fruit somewhere in the middle east- You believed it.

A Donkey got upset somewhere in the middle east and shouted at the Oga for flogging him- You believed it.

Now, our own snake just swallowed ordinary paltry 35 abi 36 million naira JAMB money, and you guys are fuming and ranting in disbelief.

Why cant we support and believe local contents for once? Haba! 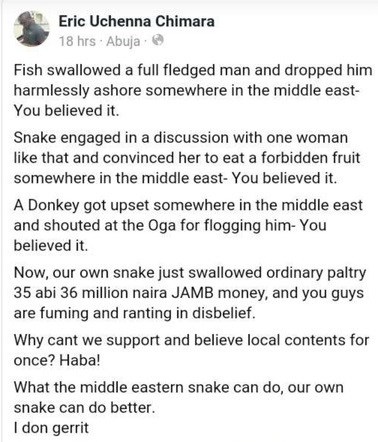