Governor of Benue State, Samuel Ortom, has approved the imposition of a dusk-to-dawn curfew on Gboko town. 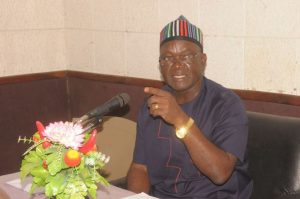 on Media and ICT, Tahav Agerzua, said the measure would remain in place till further notice.

“The curfew which will last from 6 pm to 6 am every day is as a result of security threats in the area,” Mr. Agerzua said.

“Those exempted from the curfew are those on essential services such as hospital staff and others who show convincing identification.

“He has directed security agencies particularly the police and the army to provide round the clock surveillance in the town so as to forestall a breach of the peace.

“The Governor has appealed to residents of Gboko to comply with the curfew in their own interest as security operatives have been directed to arrest those found moving about in the town during the period of the curfew.”

The government did not provide details of the security threat that necessitated the curfew but Benue has been tensed of late following communal clashes between farmers and herdsmen in the state.

According to eye witness reports, over 100 villagers in Logo and Guma local government areas were killed in successive attacks on communities across the two councils.

The state government said it buried 72 of the victims at a newly-built grave site near Makurdi on January 12.