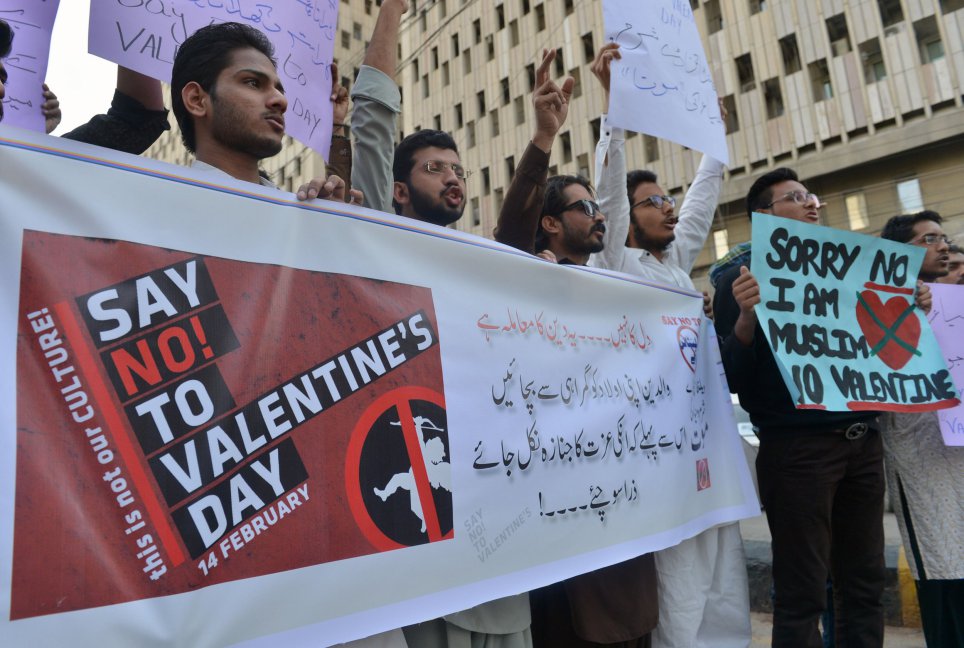 Whether you think Valentine’s Day is a fun way to show your partner you love them, or a pointless drain on your wallet (Scrooge), at least you have a choice as to whether or not you celebrate it.

Not so in many places, where the idea of a holiday celebrating romantic relationships – particularly those outside of marriage – is still highly controversial. Some states have gone as far as to enforce an outright ban on Valentine’s Day, whereas others discourage people from celebrating it by using force or intimidation.

As a result, celebrating Valentine’s Day – a holiday synonymous with twee sentimentality and commercialism in the UK – becomes a form of rebellion and political activism. For example, this is the second year in a row that Pakistan has banned Valentine’s – as well as any media coverage of the day – since an Islamabad court ruled that the holiday was un-Islamic.

More than 60% of the Pakistani population is under the age of 30, and generally in recent years people have embraced the showier side of the day with hearts, flowers and chocolates.

But the country has also been subjected to an onslaught of ultra-religious political activism from a relatively small, yet very vocal minority, which has branded such celebrations immoral and irreligious.

As Valentines’ popularity grew, parties such as the Taliban-linked Jamiat Ulema-e-Islam held rallies denouncing the day. In 2016, President Mamnoon Hussain urged Pakistanis to ignore Valentine’s, declaring: ‘Valentine’s Day has no connection with our culture and it should be avoided.’

Eventually, Islamabad High Court introduced the ban last year after a citizen, Abdul Waheed, filed a petition arguing that the holiday was a western cultural import, and went ‘against Islamic teachings and should be banned immediately’. In his petition, Waheed had added: ‘In cover of spreading love, in fact, immorality, nudity and indecency is being promoted –which is against our rich culture.’

As a result Pemra (the Pakistan Electronic Media Regulatory Authority) sent out an advisory last week warning TV and radio stations not to broadcast anything that could be seen as a celebration of Valentine’s Day.

‘No event shall be held at the official level or at any public place,’ Pemra said, including special deals offered by shops on gifts or tickets for things.

But Salman Mahmod, a flower seller, disagreed: ‘I don’t know what danger these Islamists would face if I earn a little more from selling flowers and someone can have a chance to celebrate something.’

And Abid Ansari, a 21-year-old university student in Islamabad, added: ‘I will celebrate. This is my choice.’ In other countries, Valentine’s Day bans aren’t necessarily enshrined in law – but unofficial restrictions are enforced by local and federal agencies, through intimidation tactics or raids.

In Iran, celebrating Valentine’s itself isn’t officially banned – but a lot of the activity associated with it is. Iranian shop owners aren’t allowed to manufacture or sell Valentine’s paraphernalia, such as boxes and cards adorned with hearts, special heart-shaped balloons, or red roses.

Plus, under the country’s strict religious laws, unmarried couples are forbidden from mingling with each other. But even for many hardliners, it’s not the idea of romantic love that is off-putting – this is the country that gave the world Rumi, after all. Instead, it’s primarily because Valentine’s specifically is seen as a western import.

‘Honouring foreign celebrations is the spread of western culture,’ Ali Nikou Sokhan, head of the printing works owners’ union, said in 2011 of the ban on special heart-printed cards and boxes.

‘Our country has an ancient civilisation and various days to honour kindness, love and affection.’

Because of this, nationalists have previously suggested replacing Valentine’s Day with a festival called ‘Mehregan’, an Iranian holiday that has been celebrated since before the introduction of Islam to the country.

Mehr can mean friendship, affection or love. Despite all of this, Valentine’s continues to be popular among young people in Iran, where 70% of the population is under the age of 30 and therefore grew up with no recollection of the 1979 Islamic revolution. Many, particularly younger citizens, have defied officials to mark the day with their significant others.

It’s a similar story in Indonesia. There is no official law against the holiday, but some pockets of the country, ruled by hardliners, enforce small-scale bans and employ intimidation tactics.

Last year for example, police in the city of Makassar raided minimarts and seized all of the condoms, claiming that they were being sold ‘in an unregulated way’ on February 14th to encourage people – particularly teenagers – to be sexually promiscuous on Valentine’s. Officials in Indonesia’s second-largest city, Surabaya, also ordered schools to enforce institutional bans on pupils celebrating the holiday. And in Banda Aceh, one of Indonesia’s most religiously radical cities, an outright Valentine’s ban was put in place in 2016.

The country’s contentious relationship with the holiday stems from a ruling by the country’s highest Islamic clerical council in 2012, declaring that Valentine’s was contradictory to Muslim culture and teachings.

However, although it is a Muslim-majority country, Indonesia is a secular nation in which religious diversity is enshrined within its state ideology. There are more than 220 million Muslims in Indonesia, but the vast majority follow a moderate form of the religion – and the country has sizeable Hindu and Christian minority communities too. So, despite intimidation in some cities, Valentine’s does continue to be popular in the rest of the country – particularly in the capital Jakarta.

In Malaysia, the country’s Islamic authorities seem to hit out at Valentine’s Day every February – to the point where it has become an annual tradition. In the past the Malaysian Islamic Development Department (JAKIM) blamed the holiday for everything from abortion to alcoholism – and have even suggested that celebrating Valentine’s can lead people to commit fraud, or abandon their newborn babies.

The holiday, it has said, is linked to ‘negative ills that can invite disaster and moral decay among youths’. This stems from a fatwa issued in 2005, which ruled that Valentine’s encourages promiscuity and other immoral activity.

Although the annual anti-Valentine’s campaign is now seen as par for the course, religious conservatives are becoming increasingly outspoken in the traditionally moderate country. In 2011, officials arrested almost 100 Muslims in a major crackdown on Valentine’s Day.

They were detained for ‘khalwat’ – or ‘close proximity’ – which is the crime of being alone with a member of the opposite sex, who isn’t one’s close relative or spouse. Then, in 2014, 80 Muslims were arrested by Islamic morality police for the same reason after raids on budget hotels in Kuala Lumpur and the central state of Selangor. Any unmarried Muslim couples who were sharing rooms were detained. Muslims make up just under two-thirds of Malaysia’s total population of 28 million.

Saudi Arabia’s religious police don’t look too favourably upon Valentine’s Day either. Many public places in the kingdom still segregate people by gender (although this is slowly changing), and public displays of affection remain a huge taboo.

However, that doesn’t mean that people don’t celebrate.

Valentine’s gifts and flowers are still sold in droves, albeit under-the-counter. As with most things sold on the black market, prices are sky-high, and people wanting to place orders are encouraged to do so over the phone in order to avoid detection. But it doesn’t always work, sadly. In 2014 five Saudi men were sentenced to a total of 39 years in prison, as well as 4,500 lashes collectively, after they were found dancing with six women they weren’t related to on February 14th. Officers also seized alcohol and red roses.

But it’s not just Muslim-majority countries that have anti-Valentine’s laws or restrictions. In 2010, the Russian region of Belgorod enforced a ban on Valentine’s Day after the local governor, Yevgeny Savchenko, claimed it went against Russian cultural traditions.

‘The society has to think about the consequences’ of celebrating the holiday, the governor’s spokesman Grigory Bolotnov told Ioann news agency. He didn’t specify what these consequences were, but he did rather confusingly add: ‘We could just as well have introduced a Vodka Day.’ As a result of the ban the local zoo had to cancel promotional couples’ discounts. And a small number of far-right political parties in India have tried to enforce state-specific Valentine’s bans over the years.

In 2015, the Hindu nationalist group Mahasabha warned that any unmarried couples found celebrating the ‘foreign festival’ in public in western Uttar Pradesh would face a range of punishments – including being married on the spot.

Chandra Prakash Kaushik told the Times of India at the time: ‘We are not against love, but if a couple is in love then they must get married. In case if the couples claim that they need time to think about marriage, we will tell them that if they are not certain, they should belittle love by openly going around together. We will also inform their parents.’

And in 2009, the far-right group Shiv Sena employed moral police to intimidate women in the southern state of Karnataka into dressing modestly and avoiding pubs and bars.

The group’s leader, Pramod Muthalik, promised to marry any unmarried couples seen out together on Valentine’s Day – and even threatened violence for those seen celebrating what he argued was a western import into the country.

In response, women’s rights activists sent Muthalik a Valentine’s Day present of more than 2,000 pairs of pink underpants – known as ‘chaddis’ in India, which is also slang for a right-wing hardliner. It was known as the Pink Chaddi Campaign.