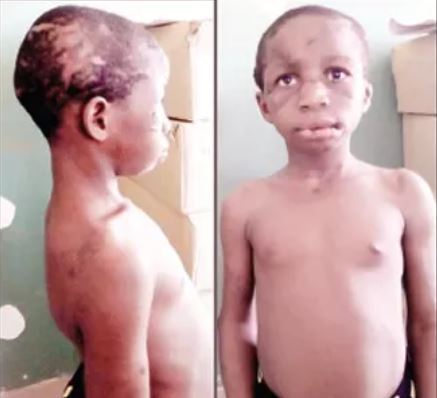 A 12-year-old girl, Faith Nwanja, has been rescued by the Ebonyi State Ministry of Women Affairs and Social Development from her childless mistress who allegedly tortured, mutilated and abandoned her. Faith Nwanja, who hails from Okoffia, Ezza South Local Government Area, was brutalized by Mrs. Nkechi Bartholomew, for being “too stubborn”.

The Nation reports that Nkechi, who is childless, adopted Faith and took her to Onitsha, Anambra State, when she was eight. But the scars on Faith’s body show that she may be a victim of inhuman treatment. Faith, yesterday, gave a graphic description of her ordeal in the hands of Nkechi.

According to her, she was always tortured with sticks, hot iron and other weapons. She added that her mistress inserts stick into her private part, chains her, and gives her food only once a day – in the evenings.

“NKECHI BARTHOLOMEW, MY MADAM DISFIGURED ME LIKE THIS. I WAS A FULL-FLEDGED HUMAN BEING WHEN SHE TOOK ME TO ONITSHA, ANAMBRA STATE. SHE INSERTED HER FINGERS IN MY EYES AND INFLICTED THESE INJURIES ON THEM.

“SHE USUALLY PUT STONES INSIDE MY MOUTH. I DON’T NORMALLY BRUSH MY TEETH AND SINCE I CANNOT DO IT, I MUST ALWAYS SUFFER FOR IT.

THE HUSBAND HAS NEVER BEATEN ME, HE IS ALWAYS ANGRY WHEN THE WIFE TORTURES ME. AT TIMES, HE WILL SUMMON COURAGE AND QUARREL WITH THE WIFE BECAUSE SHE IS BIGGER THAN HIM.

MY MADAM WOULD LOCK ME IN A DARK ROOM AFTER BEATING ME UP. I WAS TAKEN HOME BY MY MADAM’S SISTER WHO TOLD HER TO TAKE ME HOME BUT SHE REFUSED. SHE WOULD TELL ME NOTHING WILL HAPPEN TO HER IF I DIE; THAT SHE WILL SPEND HER MONEY AND BE FREED IF SHE IS ARRESTED.

I WAS ATTENDING SCHOOL IN THE VILLAGE BEFORE SHE TOOK ME TO ONITSHA. BUT IN THE FOUR YEARS I SPENT IN ONITSHA, I HAVE NOT GONE TO SCHOOL ONCE. I ONLY EAT IN THE EVENING EVERY DAY.

HE SAID MRS. BARTHOLOMEW’S ACTIONS WERE CONTRARY TO THE 1999 CONSTITUTION AS AMENDED IN 2011.

NO HUMAN BEING OR CHILD, FOR ANY REASON, SHOULD BE SUBJECTED TO INHUMAN TREATMENT. BUT THIS CHILD WAS SUBJECTED TO MORE.

THIS IS A PURE CASE OF ATTEMPTED MURDER, ATTEMPTED ANNIHILATION, SNUFFING OF LIFE AND DEBILITATING. RIGHT NOW, SHE CANNOT USE ONE OF HER HANDS, SHE IS A DISABLED PERSON. THE HEAD HAS BEEN MUTILATED, SHE HAS BEEN DISFIGURED.”

The Nation newspaper reports that the suspect, Mrs. Nkechi Bartholomew is at large, but her sister who brought the victim home has been arrested.