There are indications that the family of late singer and music producer, OJB Jezreel, is at war over the deceased’s property in Surulere, Lagos.

The deceased’s N50m property which is located on Gbaja street, Surulere, Lagos, has been causing a lot of ripples recently.

However, contrary to online reports that the aged father of late OJB, Pa Anthony Okungbowa wants his son’s first wife, Mabel Okungbowa to vacate the house with her kids.

LIB reports that the man, who is over 90 years old and currently resides in his hometown Agbor, Delta State has nothing to do with it.

However, a close source revealed that it is the late singer’s elder brothers that are behind the issue.

‘It is OJB’s elder brothers that are behind this whole issue. Especially his immediate elder brother, Tony Okungbowa’ a highly place source.

LIB paid a visit to the home and a caveat that reads: “This House is Not for Sale” has been written on the gate of the house, a four-bedroom bungalow, a duplex and a shop.

A residence on the street who asked not to be named told us that, ‘I know the day they came to write this thing, na OJB brother send boys to come write and they almooust fought with his wife, mabe because she didn’t want them to write it’.

Another source confirmed to us that ‘OJB foresaw this kind of troubles after his death and that was why he had concluded to sell the property himself before he died but the Monday morning that the buyer was supposed to come and pay Fifty Million Naira for the house was the day he died’.

An exclusive report by Thenetng dated June 14, 2016 partly reads, ‘OJB had finalised plans to sell his Surulere residence for N50m today to a commercial bank (name withheld).. As a matter of fact he would have sold the house about three weeks back but a document was missing. Now we have the document and they were supposed to come and make the payment at 4pm today but Baba don die’.

OJB passed away on June 14, 2016 following a prolonged battle with kidney ailment just a few days before his 50th birthday.

The Delta-born producer, was married to three wives with whom he had eight beautiful kids. 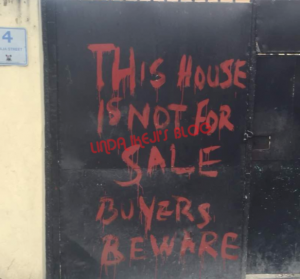 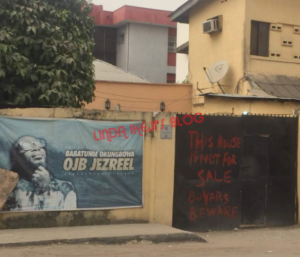