Cooking is a lost art. This lack of knowledge or comfort in the kitchen is arguably one of the biggest health concerns today. A lot of adults today are cooking less and less. Which inadvertently means that; the kids aren’t learning about food or how it’s prepared. This is both sad and scary. Sadly a lot of families do not understand that cooking together as a family is in your best interest. But it doesn’t mean that it is non existent in some of today’s families; meaning it’s not impossible.

Today, its about the kids. When it comes to activities of almost any sort, most kids want to be involved. So, right now, we want to give the kids an occasional “ownership” of a meal.

We’ve found that when they have some say in the game, they are more likely to eat dinner and not ask for something else to eat instead.

A recent study published in the Journal of Nutrition Education and Behavior examined the feasibility and acceptability of helping families cook and eat together by providing a variety of ingredients and resources.

The researchers in the study found that 86 percent of the meals provided were prepared and even more impressive, 96 percent were eaten together. 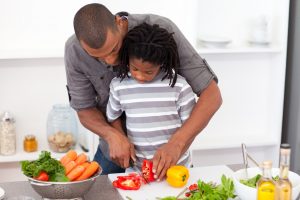 1. Figure out a time that family dinner will work.  Aim to do this one or two times more than how you’ve been doing in the past. E.g; If Wednesday is the day that works for everyone in your family, make this a priority by letting nothing else get in the way.

2. Have the kids help you pick out a meal, create a list from a recipe, and shop for the ingredients in that meal TOGETHER (its all part of the process).

Maybe the younger kids would best help mixing ingredients, while those slightly older could actually be shown some knife skills and how to cook over heat.

The sooner we can get our kids involved by teaching them the basics around the kitchen, the better off they will be as they grow up and, ultimately, when they’re on their own.