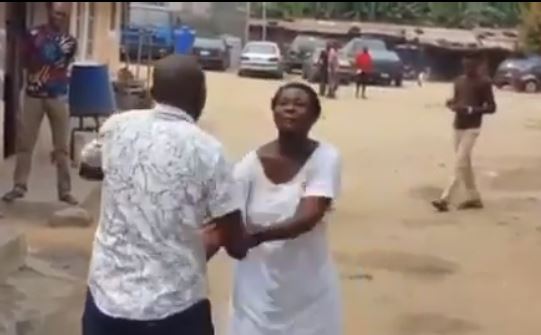 A video has shown the moment a pastor got hit by a woman he was praying for.

The woman who is supposedly an insane person, is seen with her head facing the ground as the pastor lays his hands on her while praying.

The pastor is seen pouring what appears to be some anointing oil on her head which in turn seems to pour down her head to her gown.

The pastor continues to sing as he anoints her head while onlookers stare on with anticipation. Some of them can be heard singing along.

Suddenly the supposedly insane woman snaps and hits the pastor on the head with her hand, an action which made some onlookers laugh out.

The pastor is however not discouraged as he moves closer to her to continue the prayer. The outcome of the prayer is not known as the video ends abruptly.

Some Nigerians on social media have posited that the entire thing may have been part of a movie or drama scene, considering the fact the supposed mad woman looked all clean in her white gown.