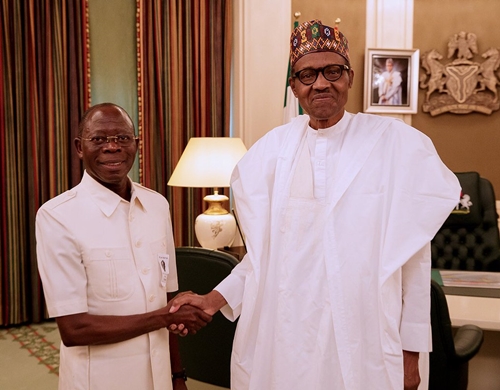 While speaking with State House correspondents after a meeting with President Muhamamdu Buhari, on Friday, the former Governor of Edo State, Adams Oshiomhole, reacted to those criticising the letter written by former President Olusegun Obasanjo to President Mohammadu Buhari.

According to The Nation, the influential politician, who said that Obasanjo is not one of Buhari’s advisers, recalled that when Obasanjo was the President of the country, he had declared that he was at liberty to heed or not to heed the advice of his advisers.

Since Obasanjo is not one of Buhari’s advisers, Oshiomhole said that Obasanjo should allow the President to make his own decisions.

The chieftain of the ruling All Progress Congress (APC), said he was in the Villa to reassure Buhari of his absolute and total support for his government and even for 2019 elections.

He said “Well, you know is a new year and I felt since I haven’t been here since 2017, so I came to wish the President a happy new year and appreciate him for his leadership of the country because as an APC activist and loyalist, I’m a party man, to reassure him of my absolute and total support for his government and even for 2019.

“I think that in moments like this nobody should seat on the fence. Our country have challenges and there are huge temptations here and there and is important he knows that he has men and women who even at this hour have huge confidence in his leadership ability. 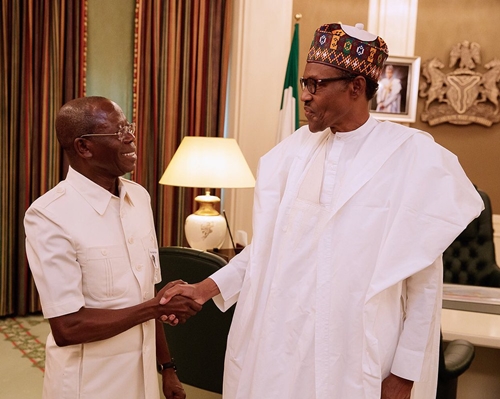 “Everything taken to account I believe that every Nigerian who wants us to sustain some of the renewed vigor to deal with one of the most challenging problem that Nigeria has faced, namely corruption and things like that, you cannot but appreciate the president and all that has been done under his leadership this past two years and some months.” he said

When asked if he was saying Buhari should not heed Obasanjo’s advise and step aside, Oshiomhole said, “I’m not sure when I see the list of the advisers that president Obasanjo is one of the advisers. But I also recall with respect that the day President Obasanjo was swearing in some of his advisers, he did say that anybody who is his adviser can advise him, he will make his own decisions. And I think that principle still stands.”

When asked to speak on the development in the country in view of the poverty level, he said “Let’s trace the route of poverty, is not something that developed over the past few weeks or few years. If you review all your newspapers editorials from my days as president of the NLC, the challenge has been how do we ensure that the Nigerian economy worked for the betterment of the majority of the people particularly the forgotten rural majority.

“So this has been there but everybody who understands development issues and if you review Africa development literature, you will agree that one of the key issue that explains the paradox between a potentially very rich continent in the case of Nigeria a very rich nation, the paradox of a wealthy country but people getting poorer and poorer has to do with the issue of corruption. And if you do not deal with that you cannot deal with other things. I think this president rightly identifies that as major area of focus.

“I think that people have to realize that the amount of damage done by the previous governments, you know when people say no blame game maybe yes, maybe no. But where I am come from, people say that is only a fool who will be working in the road, get into a pothole and fall and then get up and continue the journey, go to the hospital and treat himself.

“But a wise man must interrogate how and why did I fall and maybe in the cause of doing that find that there is a pothole. The first and simple thing to do is to fill that pothole before you continue on your journey and then go ahead and treat yourself.

“Nigeria was below ground level and from what you guys report that I read, we have always had challenges but never in terms of scale, magnitude what president Buhari inherited is difficult to describe. So, I have said so before that when you meet such a situation, your first task is to halt the drift, when you half the drift then you stabilize before you begin to go, there is no miracle about it.

“I don’t think that anybody who understands the challenge of nation building, of national economic management etc will expect that in two years you can fix in a sustainable manner all of the things that have been destroyed over 16 years before this party came into office.”