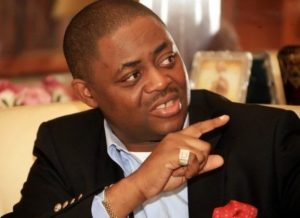 The trial of a former Minister of Aviation, Mr. Femi Fani-Kayode, for an alleged fraud of N4.9bn was delayed on Wednesday due to his absence from the Federal High Court in Lagos.

Counsel for the ex-minister, Mr. Norrison Quakers (SAN), told the court that his client was unable to make it to court as he was suffering from a heart-related ailment.

Asked by the presiding judge, Justice Rilwan Aikawa, for Fani-Kayode’s whereabouts, Quakers responded, “I was going to inform My Lord that the second defendant (Fani-Kayode) is indisposed. I got a call from his wife who said he was complaining of a heart-related pain.”

While praying the court to grant him an adjournment, the lawyer promised to furnish the court with a medical report to back Fani-Kayode’s claim of ill health.

He added, “The second defendant is unavoidably absent as a result of a health challenge, which information was related to me by the wife. I’ve requested for a medical report.

“If I get the report, I’ll furnish the court with it. I apply that tomorrow’s (Thursday) date be vacated so that we can have a date for continuation of trial.”

The adjournment prayer was not opposed by the prosecuting counsel for the Economic and Financial Crimes Commission, Mr. Rotimi Oyedepo.

But the prosecutor urged the judge to observe the provision of Section 396(4) of the Administration of Criminal Justice Act 2015, which stipulated that no party, in a criminal case, could have more than five adjournments.

Oyedepo noted that already, the case had been adjourned twice at Fani-Kayode’s instance.

After hearing the parties out, Justice Aikawa adjourned the case till February 28 and March 1 and 2, 2018.

The EFCC arraigned Fani-Kayode on 17 counts of money laundering alongside a former Minister of State for Finance, Nenadi Usman, who was listed as the first defendant in the charge.

Usman had sometime last year told the judge that she was suffering from breast cancer and had taken court’s permission, on some occasion, to travel abroad for treatment.

The third and fourth defendants in the case are one Danjuma Yusuf and a company, Joint Trust Dimensions Limited.

The charges border on alleged conspiracy, unlawful retention of proceeds of theft and money laundering.

But the defendants pleaded not guilty.