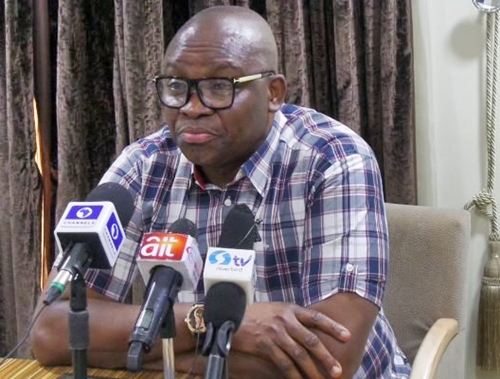 In a statement released by the Chief Press Secretary to Ekiti State Governor, Idowu Adelusi, on Monday, Governor Ayodele Fayose, has written a letter of reminder to the President, Muhammadu Buhari, on the renaming of the Federal University, Oye Ekiti, FUOYE after the late military governor of the defunct Western State, Robert Adeyinka Adebayo.

According to PREMIUM Times, the federal government had several months ago, at the funeral of the late general, announced the renaming of FUOYE as Adeyinka Adebayo University, Oye-Ekiti in a bid to immortalise him.

The Vice President, Yemi Osinbajo, as Acting President then, represented President Buhari at the burial where he announced the decision of the federal government to rename the Federal University, Oye Ekiti as Adeyinka

Governor Fayose in the letter dated January 29, 2018, with reference number EK/GOV/28/93, said over seven months after the announcement was made, the change is yet to be effected by the federal government, and urged the president to effect the change without further delay.

“As Your Excellency is aware, the Late General Robert Adeyinka Adebayo (Military Governor of defunct Western State and one time Head of the Nigerian Army died last year).

“Your Excellency was represented at his burial on May 20, 2017 by the then Acting President, Professor Yemi Osinbajo at Iyin-Ekiti, his home town.

“The Acting President at the occasion announced the decision of the federal government to rename the Federal University, Oye Ekiti as Adeyinka Adebayo University in recognition of the exemplary leadership of the late hero and front-line statesman.

“However, more than seven months after this pronouncement, nothing has been done.

“Your Excellency, this letter therefore is to serve as reminder of this significant decision of your government so as to enable appropriate directive(s) and implementation.

“On behalf of the people and government of Ekiti State, I thank Your Excellency for the thoughtfulness, please.”