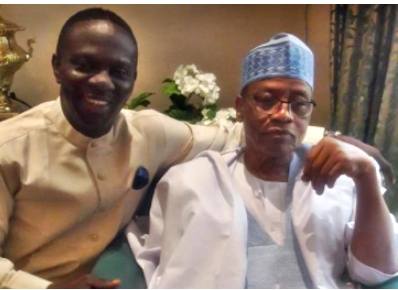 Kassim Afegbua, the spokesperson of former military leader, Ibrahim Babangida, turned himself in to the police after they declared him wanted for the controversial statement he released on Sunday, February 6th, to President Muhamamdu Buhari, on the instruction of his boss.

Recall that Babangida in the controversial statement, called on Nigerians not to vote for president Buhari in the 2019 election. Few hours later, another statement allegedly released by the son of the former military leader, Mohammed Babangida, countered the one Afegbua released, and thereafter, IBB confirmed that he authorized Afegbua’s earlier statement.

Shortly after presenting himself to the security operatives at the Force Headquarters Abuja on Wednesday, Afegbua spoke to the press where he narrated his boss’s reaction after the news broke that he had been declared wanted by the police.

He said: “It will even interest you to know that when I was declared wanted on Channels TV and Nigerian Television Authority (NTA), my boss IBB was the one who called me and said ‘why are they declaring you wanted? Are you a criminal?’ And we laughed over it.

“He also asked if I was on the run and if I have been given invitation and he said, okay that is interesting. My boss said he heard on the news that they talked about defamation of character and he asked whose character have you defamed? So I am very much in touch with him and I am not doing anything out of the blues.

“He is a man I have been with for the past 14 years as spokesman. Even when I went to serve in my state, I was still very much in touch with him. I have said it before that I am part and parcel of him, we are family and so I don’t have any cause to worry over anything. I am only here personally because I was declared wanted.

“I am not on the run; I am not a fugitive to the law, and as a responsible Nigerian I feel it was unwise on the part of the police to declare me wanted when I have not been formally invited. So I am here to present myself. I am here with my wife, other family members and my lawyer.”