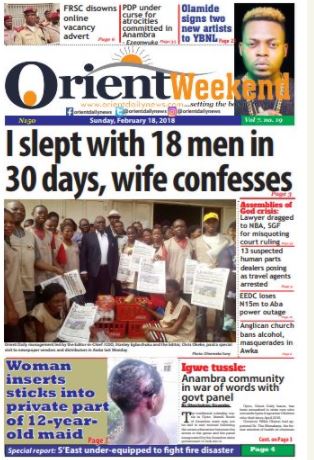 Bizarre confession of having s*xual intercourse with eighteen men within one month by a housewife, has set Asaba and its environs in Delta state on fire.

Witnesses were stunned last weekend when a 42-year-old beautiful house wife (name withheld) reportedly burst into tears with mind blowing confession in Umuagu Asaba shrine, that she had had s*xual intercourse with 18 men under one month, and in her matrimonial home.

Her sudden outburst, which attracted a crowd to the scene, stunned the elders of the Asaba community into a state of shock, especially as the woman had been well known within the area as a hardworking and unsuspecting petty trader.

It was gathered that the housewife, a native of the Ashama community in Aniocha North local government area of Delta state, had been married for the past six years and has two children.

Sources said the woman’s husband had, for long been cautioning her against some male customers who hide behind patronising her shop for some dubious intents. He also threatened to expose any illicit affairs she might indulge in using fetish charms.

Investigation revealed that, rather than heed her husband’s caution, the woman called his bluff to the extent of even, as alleged, inviting her s*xual patrons to her matrimonial bed whenever her husband went to work at the Federal Medical Centre (FMC) Asaba.

Those in the know said that one of her patrons,now late, was the son of a prominent newspaper distributor. He was also said to be a retired banker and well-known elder of Umuagu community.

The young man, who was buried recently in a dawn ceremony, was said to have allegedly enticed the housewife with huge sums of money. He was noted as a regular visitor to the woman for patronage of sorts before the bubble burst.

The husband, now fed up with the antics of his wife and her customers, gave teeth to his earlier numerous threats and took her to the shrine. At the shrine, she, in an open confession, said: “I have s*x with 18 men in Asaba, and they gave me N1.5 million altogether, I got so much in love with them because they hit me very hard s*xually; please forgive me; my husband does not last in bed and I needed it most for my upkeep hence I gave in to the men”.

Meanwhile, the husband, in a swift reaction, said: “I promise to kill all the 18 men because I warned my wife to stay away from the act. When I got wind of it, I consulted a charm specialist who will kill all of them if they refused to own up”.

An elder in the area, Ogbueshi Anthony Molokwu, said the three persons who died of swollen joystick refused to confess their sins, adding that anyone who commits a taboo will pay dearly for it.

Further investigation revealed that the latest victims allegedly vowed to hide their heads in shame and not to confess their sins.They would rather die hence the curious circumstances of their death –abnormally swollen joystick followed by death.

As at the time of this report, elders of the community has banished the 15 other culprits until they confessed their action while palpable fear of the unknown pervades the community.