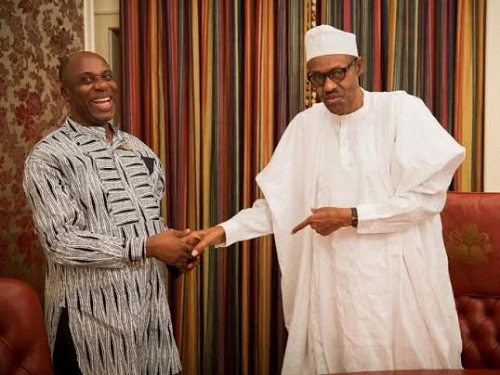 While speaking during the inauguration of a pro-APC non-govermental organisation, Free Rivers Development Initiative (FRDI), in Bori, Khana Local Government Area of Rivers, the Minister of Transport, Rotimi Amaechi, said that he nearly died while fighting to see that President Muhammadu Buhari emerged as President in 2015.

He said, “Saro-Wiwa was killed by the then machinery of power because of his believe that Ogonis and the Niger Delta should be liberated.

“I could have been killed by same machinery of power when we were fighting to install President Muhammadu Buhari because we fought same power that killed Saro-Wiwa.”

Amaechi pointed out that some Ogoni sons and daughters find it difficult to identify with the late environmentalist but he identified with him.

He added, “Everybody is now claiming to love Ogoni and knew Ken Saro-Wiwa because of election. “If you love Ogoni, bring projects to Ogoni, train their children because as governor, I trained Ogoni children overseas.

“I made sure that government paid all the fees because education was one of the issues that Saro-Wiwa died for.”

Amaechi stated that when he was governor of Rivers, he planned to turn Bori into a big city, and that was why he constructed all the internal roads in the city.

“When I became governor, there was no light in Bori and we brought light from Port Harcourt to the city.

“It was because of poverty I experienced that made me to build primary schools, primary health centres and employed teachers and doctors respectively.

“Today, the current government has reversed everything we did including free education and free healthcare care policies,” he said