I Always Believed My Form Would Return At Real Madrid 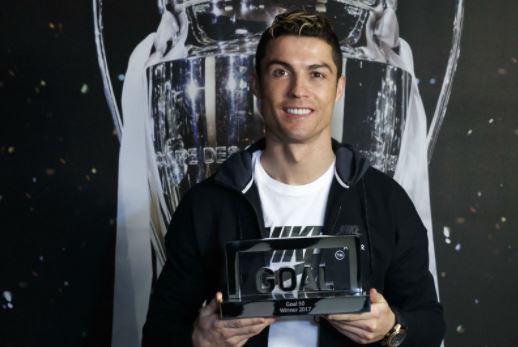 Cristiano Ronaldo has collected his award after topping the Goal 50 and exclusively told Goal that he always believed his talismanic form could be recaptured at Real Madrid.

The Portuguese superstar enjoyed another memorable year in 2017, with his exploits allowing him to sweep the board when it comes to major individual honours.

A five-time Ballon d’Or winner and holder of the FIFA Best Award, Ronaldo also contributed significantly to collective prizes such as the La Liga title and Champions League crown.

He is hoping to lead another challenge for major silverware in 2018, with a hat-trick over the weekend against Real Sociedad taking him to seven goals in his last four outings as the business end of the season approaches.

Ronaldo told Goal on his return to form: “I always look to show my best level, but sometimes things don’t go as we would like them to.

“But experience has taught me that we have to keep working hard to achieve our goals.”

That hard work has carried him to the very top of the game, and kept him there for over a decade.

Great pride is taken from maintaining those standards, with the Goal 50 award offering further recognition of his remarkable talent.

“It is a pleasure to receive the Goal 50 trophy once again,” said Ronaldo.

“I want to thank all those who voted for me and, above all, thank my team-mates, the coaches and Real Madrid staff. Without them, it would not have been possible to win it.”

Defending that trophy is one of many targets for Ronaldo in 2018, with Real preparing to enter a crucial period of the current campaign.

They will be looking to the Champions League’s all-time leading goalscorer to aid their quest for a third successive triumph in that particular competition, with a heavyweight last-16 encounter with Paris Saint-Germain next on the agenda.

Madrid host PSG in the first leg on Wednesday and Ronaldo said: “We are going to play against a great team with excellent players, which we respect very much.

“But we have already shown that Real Madrid have a very strong and united group, with a lot of experience in this competition.

“We know we have to be very focused and play two very good games to move forward in the Champions League.”

Once domestic and continental endeavours come to a close in 2017-18, attention for Ronaldo and Co will shift to the pursuit of global glory at this summer’s World Cup.

Portugal will head to Russia as reigning European champions, with there a belief within their camp that they can upset the odds once again and compete with the best teams on the planet for football’s grandest prize.

Ronaldo said: “We know that Portugal are not favourites in the World Cup. For me, the favourites are Spain, Germany, France, Argentina and Brazil.

“We are part of a group of teams that know they can compete at the highest level.”

If Real can sustain another Champions League challenge and Portugal go deep into World Cup competition, then expect Ronaldo to be there or thereabouts again when the Goal 50 returns at the end of the calendar year.