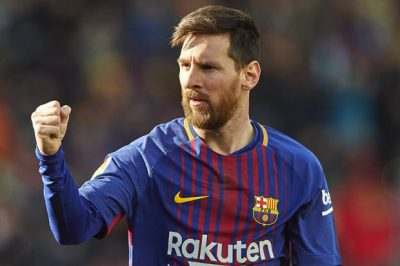 Barcelona may be in for yet another transfer shock as a Chinese Super League club, Hebei China Fortune, are reportedly prepared to meet the €700m release clause of club wizard, Lionel Messi.

And according to new rules in Chinese football aimed at curbing big spending, any deal for the Barca talisman would cost Hebei a staggering €1.4bn (£1.2bn).

Messi last year signed a three-year extension to his contact at the Camp Nou  with a €700m release clause.

Reports in various European news media said Hebei China Fortune, which signed Javier Mascherano from the Catalan side in January, are preparing another bid for Messi after their first move was rejected.

It is understood that Hebei, who already have Argentine striker Ezquiel Lavezzi on their books, took Mascherano from Barca in a bid to convince Messi to join the club.

The Argentine magician extended his contract with FC Barcelona until 2021 recently, becoming the highest paid player in football in the process.

Hebei reportedly resolved to sign the Argentina no 10 after he was named the most popular player among Chinese football fans last week, beating the likes of Cristiano Ronaldo and Paul Pogba.

And according to sources, not even the new transfer tax of 100% of the fee for overseas players introduced by Chinese football regulator would stand in Hebei’s way.

Well, there’s a price tag for everything…