As disgusting as it sounds, it’s a thing for new mums to eat their placentas. Some eat after cooking, some blend with mixed juice and fruits and drink as a smoothie, some have a specialist dehydrate and grind into powder so they take it as pills and some even eat it raw.

Kim Kardashian ingested hers through placenta pills after birthing her son Saint West and her sister Kourtney Kardashian who also ate hers the same way after the birth of her son Reign Aston Disick described it as life-changing.

Kourtney had announced this unique detail of her son’s birth with a picture of two large gray pills on Instagram, captioning it, “Yummy…PLACENTA pills! No joke…I will be sad when my placenta pills run out. They are life changing! #benefits #lookitup.”

During Sunday’s episode of Keeping Up With The Kardashian, Kim made reference to ingesting hers saying, ‘My placenta was like double the size, it was really oddly big, so she gave me two jars,’

She said she opted for grape flavor in her picked placenta.

The mother of three said this after her sister Khloe Kardashian who is pregnant for her boyfriend Tristan Thompson, said she would also eat her placenta. 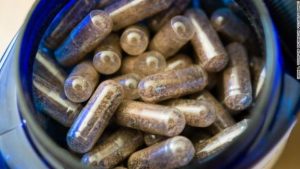