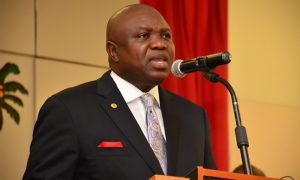 It was a day of celebration and promotion for three traditional rulers (baales) in communities in Ajara, Badagry, Lagos State, has they were  elevated to monarchs – obas.

A member representing Badagry Constituency 2 in the Lagos State House of Assembly, Sotonji David, in a statement on Wednesday, said the elevation was approved by the state Governor, Akinwunmi Ambode.

David, who commended Ambode for the approval, urged the monarchs to be role models, play positive roles in the development of the communities and stay away from partisan politics.

He stated that the recognition by the Lagos State Government was of great significance to his people, adding that the communities had been yearning to have a monarch for almost 50 years.

The lawmaker said, “The approval of the three Obas for the communities will bring about a lot of development as Obas are the custodians of the value of the people.

“We value them so much. They know what we want, so upgrading our baales to Obas is a wonderful development.”

He also advised that Obas should not be involved in politics, and show direction to the people.