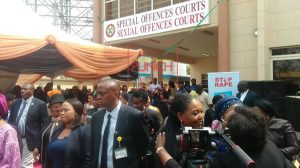 She said the move was in obedience to the directive given last year by the Chief Justice of Nigeria, Justice Walter Onnoghen, for all heads of courts in the country to create special courts for the speedy trial of corruption cases.

Justice Oke noted that there were no fewer than 500 financial crimes currently pending before the Lagos State High Court, most of which had now been transferred to the special courts for expeditious hearing.

The CJ said the judiciary shared in the concern of President Muhammadu Buhari that most of the corruption cases filed under his administration had at best moved at snail’s pace.

The courts, tagged, “Special Offences Courts” were inaugurated in Ikeja at a ceremony attended by the acting Chairman of the Economic and Financial Crimes Commission, Mr. Ibrahim Magu.

Among other dignitaries who graced the occasion were the wife of the Vice-President, Mrs. Dolapo Osinbajo, and the Lagos First Lady, Mrs. Dolapo Ambode.

The Chief Justice, in her remarks, said, “We, in Lagos State and the Lagos State Judiciary, in particular, have taken the bull by the horns and implemented the Honourable CJN’s directive by designating four courts as Special Offences Courts to hear corruption and financial crime cases.

“We believe strongly that the special courts shall fast-track the trial of these types of cases and encourage the EFCC and other relevant bodies like the ICPC to expedite the investigation and prosecution of such cases.

“Presently, there are over 500 cases of financial crime pending before the high court, the bulk of which have now been assigned to the Special Offences Courts.”

She said it was cheering that Nigeria was joining the league of other countries, such as Indonesia and Malaysia, which had since thought it wise to take drastic steps against financial crimes by creating specialised courts.