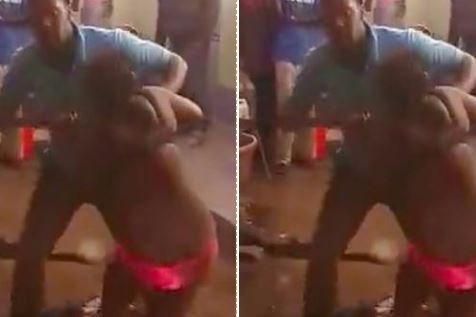 A 38-year old, Chukwu Hilary has vented his anger on a lady, Glory Sunday by engaging her in a brawl, biting and tearing her clothes, and leaving her half naked in public

It was learned that her clothes were badly damaged, she was left with only her pant before she ran inside but by then those present had seen her body and she was ashamed.

The incident happened at Moshalashi Street in Mushin, Lagos where they resided.

It was gathered that what would have made the suspect to publicly disgrace the victim was not revealed by the parties involved in the matter.

It was however gathered that Hilary and the victim were said to be at loggerheads over an undisclosed matter in the area before the incident happened.

On the day the incident happened, it was gathered that Hilary and the victim had an exchange of words which resulted in a fight.

It was then that Hilary grabbed her, bit and tore her clothes into pieces and left her with only her pant before she was rescued.

The matter was reported to the police at Olusan Division and Hilary was arrested and detained at the police station.

Hilary was later charged before Ogba Magistrates court Lagos for the alleged assault.

The Presiding Magistrate, Mr. O.A. Ogbe granted him bail in the sum of N100,000 with one surety in like sum. The suspect was remanded in prison custody pending when he will perfect his bail condition.