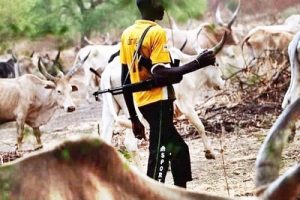 The four herdsmen whose identity were unknown at the time of this report, were allegedly carrying guns around the town before they were arrested.

The suspects were said to have been handed over to the state police command for interrogation.

When contacted, the state police Public Relations Officer, Mr. Femi Joseph, confirmed the arrest, stating that the command had begun investigations on the matter.

“They have been handed over to us, and when we interrogated them, they told us that they were farmers and that they wanted to board a boat to Edo State; but we have begun investigation to ascertain their claim.

“However, there was no report the suspects had killed anybody with the arms they were carrying about,” Joseph said.

According to the PPRO, some items recovered from the suspects include guns, cutlasses, daggers and axes.

It was gathered that the development has created fear in the area, as many people, especially women, have reportedly stopped going to farm for fear of being attacked.

To this end, a group in the community under the auspices of Arogbo Ijaw Community Organisation, in a statement issued on Thursday by its chairman, James Ashidi, has appealed to the security agents not to allow the herdsmen to enter their community.

He also urged people of the community to be vigilant and report any suspicious movements of anybody to the security agents.