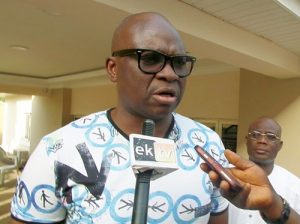 The Ekiti State Chapter of the Peoples Democratic Party(PDP), has insisted that it is yet to have a candidate for the coming governorship election, despite the open endorsement of the deputy governor, Olusola Kolapo, by the governor, Ayo Fayose.

The party is witnessing internal tensions following the governor’s choice of his deputy as his successor, in opposition to other aspirants who have shown interest in the party’s governorship ticket.

Former PDP spokesman at the national level, Dayo Adeyeye and Biodun Olujimi, a serving senator, are raising dust over the governor’s action.

Both aspirants have jointly condemned Mr. Fayose’s “imposition” of his deputy, warning that it might cost the party the governorship election.

Publicity Secretary of the party in Ekiti, Jackson Adebayo, told PREMIUM TIMES on Thursday that Mr. Fayose’s support for his deputy had nothing to do with what the party as institution was doing in preparing aspirants for the primaries.

“There is a difference between the activities of party stakeholders and the party as an institution,” Mr. Jackson clarified.

“The party does not have a candidate for the governorship election yet until the primaries. Whoever wins the majority of the votes of the delegates will become our candidate.”

He however, noted that every member of the party had the right to declare his support for the candidate of his choice.

“The governor is a member of the party, he has his interest and that is his right; and he has only one vote, he has the constitutional right to support and canvass support for the candidate of his choice,” he said.

“But for us as a party, we do not have and we cannot have a candidate until the primaries are over. The showing of any aspirant at the primaries will determine whether he will emerge our candidate or not.”

Mr. Jackson noted that no aspirants have been officially listed to contest the primaries because the national headquarters of the party was yet to issue guidelines on and date of the primaries.

He added that, ”although some persons may go about announcing that they would run for the ticket, only those who obtain the form would eventually be recognised as aspirants when the process starts.”