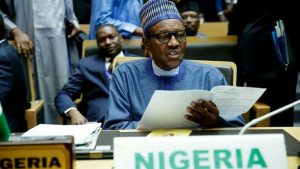 The Nigerian presidency on Wednesday said it was happy at the choice of Mr. Buhari even as the opposition People’s Democratic Party, PDP, back at home stated its “deeply disappointing reaction to the inauguration of President Buhari as the continental anti-corruption Champion for the year 2018”.

“As a matter of fact, a section of politicians and some economists have been quick to pronounce the war against corruption in Nigeria a failure because those people are the greatest losers wherever the ordinary citizens make a gain.”

Mr. Shehu said the PDP in particular “has come to signify the face of corruption in Nigeria and they have not hidden their efforts to shrink the achievements of the Buhari Administration”.

“They are bent, as it clearly seems, on crushing all hopes of ridding this country of the scourge of corruption.

“As the President keeps saying, in 16 years that the party held sway, we solely relied on oil, the price of which was as high as US$140 per barrel.

“This was done rather than growing the economy through capital investment in assets like seaports, airports, power plants, railways, roads and housing as this administration is currently doing,” he said.

Mr. Shehu also said that Nigeria did not record a ‘single major infrastructural project’ in the 10 years preceding the Buhari administration.

“In short, the money was mismanaged, spent largely on what was not needed and no savings were made. They compounded the problem by borrowing heavily and failed woefully to pay contractors and international oil companies,” he said.

He also said the last two years of the Buhari administration have revealed the “massive and unrivalled level of corruption in which the PDP and its leaders at the highest level thrived.”

“So it mustn’t surprise anyone really that they have chosen their obstructionist role rather than lending a helping hand in the fight against corruption.”

Mr. Shehu also came down hard on a former Minister of Petroleum, Diezani Allison-Madueke, over the massive recoveries of stolen assets traced to her.

“By a rough estimate, the amount of money including the value of estates recovered (or in the process of being recovered) from a single woman by virtue of being close to power can pay for the construction and equipping a cancer treatment hospital for each of the six geopolitical the Federation, and still counting,” he said.

Mr. Shehu said recent attacks against the Buhari administration came out simply to, “cast a pall on this continental honour to President Buhari and to Nigeria which, in terms of added significance had the Secretary-General of the United Nations, Anthony Gutierrez at hand giving full support”.

The presidential spokesperson said it is both a tragedy and an opportunity that this honour on Nigeria and its leader is in its timing, is coming amid heightened criticism of his well-recognized efforts to purge the country of bribery, corruption and illicit cash outflows that have become so entrenched to the point of forming a strong and normative social practice.

“To help Africa lead this fight, leaders of the 55 countries making up the African Union, AU leaned on President Muhammadu Buhari who swept to power in 2015 vowing to get to grips with graft and unbridled looting of public resources which is undermining the Nigerian economy.

“In its two-and-a-half years in office, the administration has made significant strides in its efforts to identify and block loopholes through which oil revenues are stolen; payrolls are populated with ghost and non-existent workers and devised ways of blocking criminals as well as corrupt businessmen and officials from laundering illicit wealth.

“As aptly captured by retired Ambassador Usman Sarki, the former Deputy Permanent Representative to the UN, ‘this well-deserved laurel on Mr. President’s brow demonstrates the close affinity between domestic policy and foreign policy, particularly in matters that have transnational and global significance like fighting corruption.’

“Through concerted advocacy and demonstrable leadership shown by Mr. President, the world and Africa have now come to accept the fact that Nigeria is making progress in the anti-corruption front. This positive achievement is now acknowledged as an example of best practice for others in Africa.

“The African Union’s selection of this subject as the theme for this year’s summit meeting is not only of symbolic significance. The AU has come to recognise that corruption is an egregious problem that has fostered many ills all over the Continent.

“Appointing an Anti-corruption Champion is appropriate and timely, and an indication of the prioritisation of the fight against the scourge by all of Africa.

“This is the logical outcome of many previous initiatives by the AU, such as its high-level panel (jointly with UNECA) on illicit financial flows (IFF) from Africa that was chaired by H.E. Thabo Mbeki.

“Giving this honourable task to President Buhari is therefore, recognition of his mettle and reinforcing the evident commitment that he has shown to eradicating this evil in Nigeria. While Mr. President can be trusted to guide by example and provide the needed leadership, it is also important for others to support his efforts.”

The spokesperson also spoke on the theme of the event and Mr. Buhari’s role.

“As widely-reported in his speech on the launch of the African Anti-Corruption Year dubbed Project 2018 on the theme, “Winning the Fight against Corruption: A sustainable path to Africa’s Transformation,” the President showed a clear understanding of what the task entails and showed a readiness of the rare type to take on the assignment diligently.

“In his (Buhari) words: ‘I promise that I and my government shall do our very best to ensure that the anti-corruption agenda receives the attention it deserves.’

“He made it clear that corruption is indeed one of the greatest enemies of our time; that it runs completely counter to our shared values as Africans of justice, the sense of fairness, law and order and equity and equality. Corruption, he said, rewards those who do not play by the rules and also creates a system of patronage where the resources are shared out by a small elite, while the majority are trapped in poverty.

“When it comes to tackling corruption, Mr. Buhari noted that the Continent has made significant strides in putting in place legal and policy frameworks, notably the African Union Convention on Preventing and Combating Corruption (AUCPCC). However, the adoption of legal and policy frameworks on their own have not had the desired success in tackling this evil. This, he noted, is one of the driving reasons why the AU has designated 2018 the African Anti-Corruption Year. The idea is to scale up the efforts during 2018.”

The statement also said the AU would organise a Youth Congress on Corruption to address the specific challenges and impacts that corruption has on emerging leaders.

“Engaging young leaders is especially important in developing a new attitude to transparency and accountability.

“According to President Buhari, the manifestation of corruption in Africa is also a reflection of the need for stronger leadership and oversight institutions. ‘Tackling corrupt acts and greed require a reorientation of our attitudes and perceptions to corrupt practices. Changing the state of play requires retraining and education as a means to instil better and more transparent values,’ he said.”

The statement noted that as part of the activities during the year, Mr. Buhari would bring about engagements with key actors in the fight against corruption including parliamentarians, the media, the business community and faith based groups.

“As corruption cuts across every sector in society, we should continue to support consultative dialogue among all actors to forge joint solutions to this menace and we look forward to your support and ideas.”