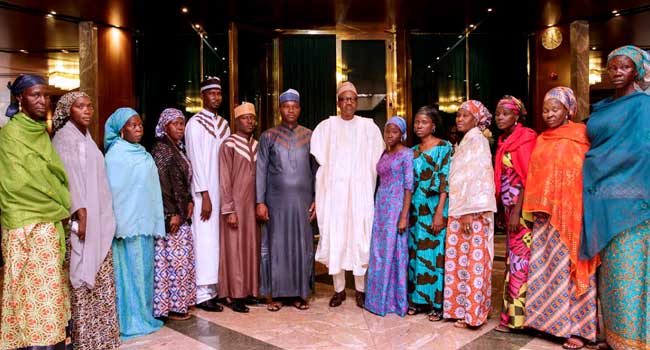 President Muhammadu Buhari, has met with the recently released three University of Maiduguri lecturers and the 10 women abducted by insurgents in the Northeast.

The meeting was held on Monday in Abuja. At the meeting, the President instructed the National Youth Service Corps, (NYSC) to issue a certificate of completion to one of the women who was serving at the time of her abduction.

Director of the State Security Service (DSS), Mr Lawal Daura, whose agency coordinated the negotiations that culminated in the release of the abductees, said negotiations were the best option at the time in order to facilitate the release without endangering the lives of the victims.

The abductees have all been medically examined, treated, psychologically evaluated and are ready to be reunited with their families. 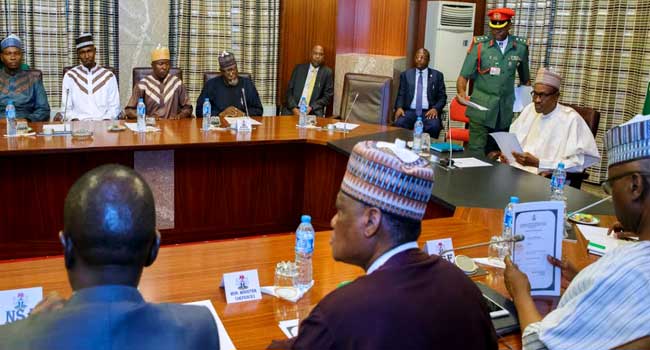 All 13 persons were part of the oil exploration team ambushed by Boko Haram on Tuesday, July 25, 2015.

The International Committee of the Red Cross (ICRC), said in a statement that those freed were “10 women police officers and three university professors”.

“We are so pleased that these 13 people are free and will be able to see their families again,” the ICRC’s Deputy Regional Director for Africa, Patrick Youssef, said.

Although it facilitated the handover of the freed persons, the ICRC said it was not involved in the negotiations that led to their release.

“The armed opposition handed the 13 people over to ICRC representatives who transported them to Nigerian authorities,” it said.

“This action was similar to what the ICRC did in October 2016 and May 2017, when we transported the released “Chibok girls” to Nigerian officials.”

Share
Facebook
Twitter
WhatsApp
Previous articleToday’s Question: Do You Think Corruption Has Worsened Under Buhari?
Next articleOh No! Popular Heavyweight Boxer Collapses, Dies After Beating His Opponent In The Ring
- Advertisement -