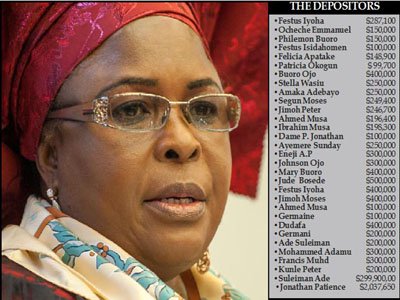 She blew thousands of dollars at highbrow stores. The cash came from $11,849,069.03, which the Economic and Financial Crimes Commission (EFCC) said 31 individuals and companies paid  into her two domiciliary accounts.

She went on a shopping  spree in expensive outlets in the United States, Britain, Germany, Hong Kong, UAE, Italy and China.

Perhaps overwhelmed by the EFCC probe and its likely consequences, the ex-First Lady has applied for an out-of-court settlement with the EFCC.

In “a major breakthrough by EFCC with international collaboration” detectives found that about $7,452,319.32 suspicious funds were deposited in the ex-First Lady’s account with number 2110001712 between 8th February 2013 and 7th April 2015.

The account was opened on  September 12, 2013  by a former Special Assistant on Domestic Affairs to ex-President Goodluck Jonathan Hon. Dudafa Waripamo Owei depositing  $1,948,400.00.

The second account was opened on February 22, 2013 at First Bank.

The card was allegedly used in highbrow shops, such as Marks and Spencer,  Kingsgate, Natwest Bank, Gina stores and Harrods.

A source in EFCC said: “We have gone far in our investigation of the ex-First Lady to prove that it is not  a case of witch-hunt in any manner whatsoever. We are already trying to verify the names of the depositors if they really existed or they are fake.

“ Since we have uncovered all these suspicious deposits, we only need her to account in court on how she came about them. Our crack teams worked day and night to trace these funds.

“With international collaboration, there is no hiding place for Politically Exposed Persons (PEPs) because some of these malls sometimes  report suspicious transactions or spending. They marvelled at where top Nigerian political office holders and their spouses got the cash being lavished.”

The former First Lady, however,  seems to be tired of litigation over her fortune. In a January 30, 2018 letter, titled “Proposal for out-of-Court Settlement of all cases related to Dame (Mrs.) Ibifaka Patience Jonathan,” she told the EFCC of her intention to settle the matter.

The letter, which was written by her counsel, Chief Ifedayo Adedipe (SAN), is being considered by the EFCC.

The letter said: “As senior counsel,  representing Dame (Mrs.) Patience Jonathan (former First Lady) and companies linked to her and some family members, associates,  companies and NGOs, we have thought it fit to engage your commission in a discussion over all issues involving her and the commission with a view to having amicable resolution of all cases as stated above.

“This will enable both sides create an atmosphere for mutual understanding and peaceful coexistence. We will therefore appreciate it, if you can give us an appointment at your earliest convenience to have a discussion over all matters involving her and members of her family.

“We believe that an amicable settlement will be in the best interest of both your commission and our client.

“We assure you of our utmost commitment and sincerity of purpose in this connection,  and we solicit your cooperation in this regard. Please, accept the assurances of our warm regards.”

Another EFCC source said: “We have received a letter from the ex-First Lady, we are studying it on whether or not to accept the out-of-court settlement or allow justice to take its course.”

Apart from the cash, the ex-First Lady is linked to 12 choice properties and a plot of land on which a building is being built.

The investigative team had recommended that Section 7 of the EFCC Establishment Act 2004 be invoked on the properties after due verification.