A lecturer at the University of Osun has reportedly flogged some female students publicly inside the classroom. 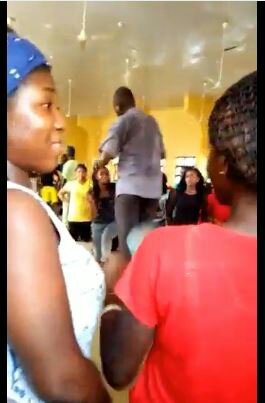 This is the rather shocking video making the rounds on social media and has gotten some people talking.

The video shows a man with a cane in his hand, flogging some ladies who were kneeling on the floor in front of him.

According to a twitter user who posted the controversial video, the man in the footage is a lecturer at the Osun State University, UNIOSUN, and that he was flogging some female students.

Tori.ng has not independently confirmed the authenticity of the claims about the video but the footage has been condemned with many wondering why full grown girls will be flogged in public.

Some social media users have reacted with many asking why the students allowed herself to be flogged.