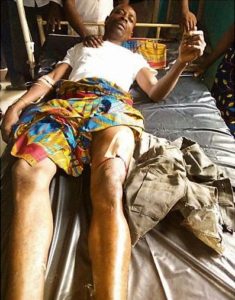 A Nigerian soldier disgraced for allegedly assaulting a female trader has mobilized leaving an innocent man at the hospital after he was struck by a stray bullet.

The innocent man shot during the scuffle in Aba

An innocent man has been shot after a soldier was beaten mercilessly by another man for assaulting a female trader in Aba. It was gathered that the incident happened today, at Uratta Junction, Aba, Abia State.

According to a report by Instablog, after the beating, the disgraced soldier later mobilized his colleagues at Christmary hotel and Onions market to the scene where the incident happened. They allegedly started shooting sporadically and beating everybody in sight.

An innocent man ended up being hit by a stray bullet.