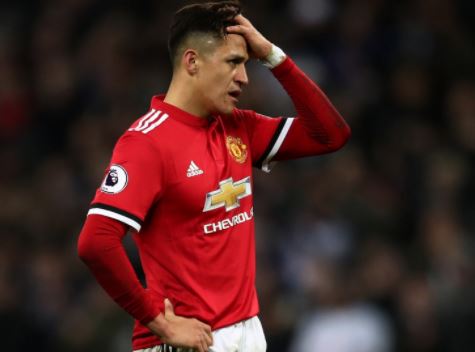 Manchester United manager Jose Mourinho praised Alexis Sanchez’s effort, but felt the attacker was not suited to the way his side’s loss to Tottenham unfolded.

A Christian Eriksen strike after 11 seconds and Phil Jones own goal saw Spurs to a 2-0 win over United at Wembley on Wednesday.

Sanchez, making his first league appearance for United, struggled to have an impact, forced to drop deep during the second half.

But Mourinho was pleased with the Chile international’s commitment during his side’s loss.

“He worked hard, but again the transformation the game had, the game was not for him,” he said.

“In the second half, I tried to give him a position where he could be closer to [Romelu] Lukaku but then he felt the need to drop too much to organise.

“But he gave everything, good effort and this is a good feeling for me to know that the player is available with that spirit.”

The defeat saw United slip 15 points behind Premier League leaders Manchester City, dragging them back into a top-four battle.

Mourinho said his team would continue fighting, adding that City’s lead was huge even before his side’s loss.

“We lost. I always told that when the leader [in the table] is with a certain distance, I’ve been there a few times, you are calm, you’re relaxed, you don’t feel the pressure,” he said.

“You know that your opponents sooner or later are going to drop at least a couple of points and you’re completely in control, so yes we played match after match.

“Yes, the Premier League finishes for us at Old Trafford in the last match against Watford in May but we knew that the distance to the leader was already considerable, even before this match.

“Now we have us, Chelsea, Spurs, Liverpool, Arsenal – we will be there fighting for the positions.”