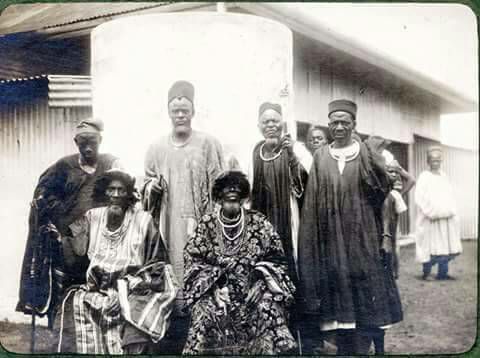 THE MEANING OF “IGALA” AND THE IGALA PEOPLE by Felix Omachoko

A word is a representation of an idea, of a thought or an image. For example, when one says: Apple, one is necessarily describing the idea of what an apple is, its physical properties, appearance, taste etc. One may not explicitly say that an apple is sweet or red but those images come to one’s mind nonetheless.
Hence it increasingly becomes difficult to understand someone or some text when one does not understand the meaning of a few words as one is unable to visualize the idea represented by the word.

THE MEANING OF THE WORD “IGALA” IGALA is a compound word with “Iga” as its root and “Ala” as the qualifying noun. In Igala language, Iga means a partition, blockade, a dividing wall e.g. partition of India . And the qualifying noun, Ala means “Sheep”. This could imply that the first settlers in Igalaland (the Igalamela) saw themselves as God’s flock or sheep that eventually found their greener pasture in this location. They probably felt it was better to settle here. They came, they saw it was a fertile ground full of prospects and they settled here from antiquity.Perhaps, they made Iga-Ala Mẹla that is, making nine “sheep” apportionments, partitions, dividing walls or simply, fences against possible invading troops, as it was common in those days in search of a formidable security. They were then referred to generally as the IGA-ALA people. The name gradually metamorphosed from Iga-ala to IGALA as a result of the combination of the two vowels (a + a). The nomenclature then became IGALA. The name must have come in the figurative sense of people referring to themselves, as the sheep feels shielded and protected under its shepherd.

God (Ọjọ), is often seen by the Igala people as Ọchamachala (owner of the entire universe), Odobọgagwu (the all-powerful one), Anẹ-magẹdọ (the all-courageous one), etc.
This sense of being protected under God’s shadow was extended into the naming of a certain street, UBI-IGA (behind the partition) in Idah, during the Benin/Igala War in A.D. 1515 – because of the partitioning against foreign invaders. Other parts of Igalaland are not left out in naming villages after their functions. For instance, villages which served as formidable fortresses against foreign invasion at a certain period of history or the other, had such names e.g. Iga-Ebije (iron partition), Iga-Ikẹjẹ (Ikẹjẹ’s wall); Igaliwo (Aliwo’s wall), Iga-Olijo (Adder’s wall), Igagbo (Agbo’s wall); Ig’ọjọ (God’s protective wall), etc. It is interesting to note that the Igas were practically erected in those days for defensive purposes.

According to 0ral tradition, the Odogo (ancient storey building) in Ata’s palace was used as a hideout. From there the soldiers had a full view far over and across the cliff near the River Niger. By this means they were able to detect enemy troops afar. A river is also believed to have changed its course or totally dried up around Ọkpakpala-Ukwaja. This river also served as another shied against enemies.
From the above, it is obvious that Igala people are people who feel highly secured under God’s umbrella. That is why in times of adversity, they would simply exclaim “Ọjọma” (God knows or God is in control). IGALA meaning is not in any way connected to that of ” ANTELOPE” IN YORUBA LANGUAGE ……..linking of the Igala with Yemen In Arabia is another highly speculative opinion. This story was probably a device of the Northerners to enslave Igala people. The people of Igala had long settled before the Galas entered Ethiopia. because tradition has it that it was only in the century A.D, that the Gala migration to Ethiopia took place. In addition, it is quite improbable that the Semite Galas would metamorphose into Negroes of the contemporary Igalaland overnight. The similarity in name is thereby merely coincidental.

The Mali connection remains baseless too because the similarities between the words “Mela” (nine of them) of Igala-Mela (the nine Igala kingmakers) is in no way attributable to “9” as originating from Mali. To the Igala mind, “nine” simply symbolizes perfectness.
Likewise, the supposition that the Igalas came out of the Fulanis, carries no weight, since “no tradition in Igala supports it. History attests to the fact that the Fulanis were still in the region of Senegal by the time the Igala were already having a “centralized state system … in the 12” century. Again ,that Igala have a traditional link with the Benin kingdom is indubitable. There abound theories for instance, that support a Benin origin of Igala kingship. However, there was already in existence indigenous Igala people with their kingship systems before the arrival of the Benin kings. But it must be understood that at some stage of Igala history, the Benin people wielded some power of influence over them. The difference in their system of government alone is enough reason to prove that it is never true to say the entire Igala originated from Benin.
The tradition, which holds that the Igala has the same origin with the Yoruba seem to be a plausible one. This humble submission is based on the fact that the Igala language has a lot in common with the Yoruba. Okwoli supports this view when he said: “When people speak the same language. or related languages, there is every reason to believe that they have common origin or have met somewhere.
THE JUKUN /IGALA LINK, though that there were certain Jukun immigrants who came among the Igalas at some stage of the development of the Igala kingdom is quite true but mind you Igala were in existence before the arrival of JUKUNS…

THE FACT AND THE REAL ORIGIN OF IGALA : The problem is that we human beings often don’t base our worldview and values on the Bible and Quran . Instead, we ignore God’s truth and adopt man’s ideas and values. This is always dangerous and most destructive in the area of human origins and its implications for social behavior. IF THE ORIGIN OF ALL PEOPLE GROUPS BEGINS AT THE TOWER’S OF BABEL. GENESIS’S 10:32 ITS MEANS ALL TRIBES INCLUDING IGALA PEOPLE ORIGINATED FROM TOWERS OF BABEL : The biblical account of the tower of Babel is found in Genesis 11. The tower was built by the some of the descendants of Noah’s sons who survived the Great flood. They had eventually traveled eastward and began to settle in a plain area called shinar (Babylonia) in Mesopotamia, and of course shared the common language. Having developed ungodly character, they began the planning of great tower out of their egotism, pride and rebellion .This group said ” come let’s us build for our selves already city with tower that can reaches to the heavens, so that we may make a name for our selves : otherwise,we will be scattered over the face of the whole earth (Genesis 11:4)in Gen. 11:8-9 when God saw their intentions and the purpose of their efforts, his judgement on man was once again brought forth. He scattered them them across the earth confusing or confounding their language so that they could no longer communicate with each other ” So the the lord scattered them from there over all the earth, and they stop building the city. That is why it was called Babel -because there the Lord confused the language of the world..

SUMMARY OF IGALA JOURNEY SO FAR :

The meaning of Igala was never antelope and we are not from any tribe but who we are, created by God!
If you are proud to be Igala Pls share this with all your friends and family as you read……..