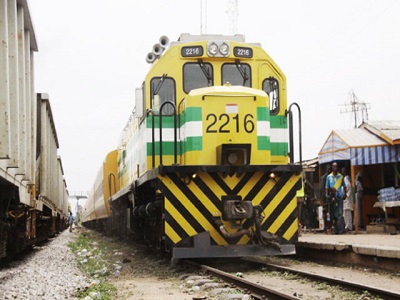 Tragedy struck in Mile One area of Port Harcourt on Tuesday when a train hit a middle-aged woman selling roast plantain and fish beside a rail line.

The incident, which occurred under the popular Mile One Bridge, caused panic among traders who witnessed it.

But in the absence of an alternative, some traders went back to trade in the area.

An eyewitness, who identified himself as Emeka, said the woman, whose table had earlier been destroyed by street urchins, had just repaired it before she was killed.

“When I rushed there, I saw blood on the ground; some people had to rush her to a nearby hospital. With the amount of blood I saw, she could not have made it,” Emeka stated.

Another eyewitness, who gave his name as Chidi, said the woman’s legs were crushed when she was found.

“I don’t think she died. My friend said she was critically injured. Her legs were shattered,” he said.

The Public Relations Officer of the Nigerian Railway Corporation, Port Harcourt Station, Mr. Samuel Atoyebi, however, said he had no knowledge of the incident.

He said, “The management and my office have not received any accident report from the train driver and his crew. So, we have not heard of such incident at Mile One flyover.

Atoyebi also pleaded with parents and guardians to stop allowing their children to play close to the rail tracks.

He said, “Sometimes, children put stones on the tracks, thinking that it can derail the train, but due to the vibration of the train, anything on its path will jump off. This is wrong.”

“When you hear the train’s horn from a distance, please stay clear of the tracks because anything can happen. We have to be careful.”

According to him, despite warnings from the corporation, some mechanics still repair vehicles and abandon scraps on rail lines, which he said could cause damage to train coaches.

He urged all motorists to stop at least 12 metres away on both sides of the rail tracks when they see officials waving the yellow or black flag.